Mozart, movies and more at the Dairy

2017–18 concert season gets underway at the Dairy Arts Center

Some of Boulder’s best musicians want to see you at the Dairy. 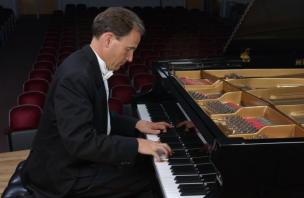 That’s the punning implication of the new series CU@The Dairy, presented jointly by the Dairy Arts Center and University of Colorado College of Music. That concert series opens Thursday, Sept. 7 with “Miraculous Mozart,” a program of Mozart piano concertos with David Korevaar, the Helen and Peter Weil Professor of Piano, doubling as soloist and conductor, and continues eight days later, Friday, Sept. 15, with a screening of the 1918 film The Yellow Ticket with live music performed by klezmer violinist Alicia Svigals and pianist Marilyn Lerner.

“Miraculous Mozart” will feature two of Mozart’s piano concertos, K449 in E-flat major and K450 in B-flat major, with Korevaar leading and playing with a chamber orchestra. 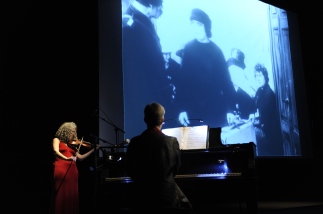 A silent film from 1918, The Yellow Ticket is of great historical interest for several reasons: It was filmed in the Warsaw Ghetto; it features a teenaged Pola Negri, who went on to great fame as a femme fatale in Hollywood; and it was reconstructed from various partial sources after the Nazis tried to destroy all traces of the film in the 1940s.

September music events at the Dairy:

NOTE: The time of the screening of The Yellow Ticket has been corrected to 8 p.m. An earlier version of the story listed the time as 7:30 p.m.