“Motion and Stillness,” a collaborative music and visual performance, will bring together pianist David Korevaar and multidisciplinary video artist Betsy Tobin at 7 p.m. Wednesday, Sept. 19, at the Dairy Arts Center.

Korevaar, the Peter and Helen Weil Professor of Piano in the CU College of Music, is one of the most active performers in the region. A member of the Boulder Piano Quartet, he often performs chamber music with his faculty colleagues and appears as concerto soloist world wide.

For the Dairy performance, Korevaar will play music of Lowell Liebermann, whose works he has recorded. He also organized a festival of Liebermann’s music last year at CU. He will play two impromptus and two nocturnes by Liebermann, as well as works by Italian composer Luigi Perrachio, and the “Tempest” Sonata of Beethoven. 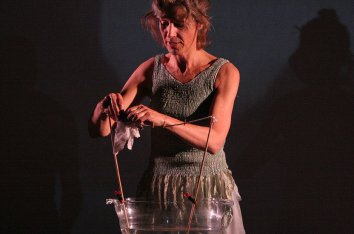 In a written communication, Korevaar said he is intrigued by working with Tobin. “She is going to do a combination of video projections and some shadow work with the music,” he wrote. “What I’ve seen so far has been interesting and engaging, but most of it will be coming together in the days just before the program.

“It’s fun to collaborate with a visual person, but also kind of new for me, so I’m looking forward to seeing how it all comes out.”

Melissa Fathman, the executive director of the Dairy Center, has said that the program is based in the concept of synesthesia, in which perceptions in one sense—such as sound—are tied to perceptions in other senses—such as vision or taste. Examples include people for whom numbers have colors, or days of the week have specific shapes. In music, the association of keys or pitches with specific colors or even tastes have been reported.

“It was my lifelong fascination with synesthesia that led to the idea for ‘Motion and Stillness,’” Fathman has written. “The recipe was quite simple: introduce two wonderfully gifted artists—a pianist and a videographer/performance artist—and invite them to create a breathtaking evening of sights and sounds. And then eagerly await their creation.”