Powerfully expressive work, written from the heart, reaching out to hearts

The official premiere was Friday (April 13) in Denver, with a second performance, which I attended, last night in Boulder (April 14). Both performance and work were assured, polished, and deeply moving.

Nytch is an associate professor of composition and director of the Entrepreneurship Center for Music at the CU College of Music. He was inspired to write the concerto by the fate of the Hungarian violinist Sandor Feher, who died when the cruise ship Costa Concordia sank in 2012. When the ship collided with the rocky shore, Feher first assisted other passengers, including children, and then went to retrieve his violin. He never came back.

“I heard this story and felt that I had to respond to it in a musical way,” Nytch has said. What he chose to do was to tell the story of the violin, not the violinist. This is a highly original creative decision, one that led Nytch away from the events of Feher’s story, toward the moods the story passes through. The concerto is thus more universal, and more deeply moving. 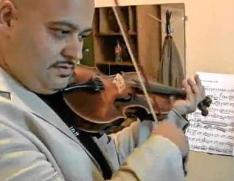 Looked at in another way, the concerto is programmatic, but not in the usual sense. That is, it does not have a program of events, with music representing the collision or Feher’s descent back into the ship. Instead it has an emotional program, portraying in turn the jollity of the fiddle and its player in good times, the loneliness of their separation, and finally a vision of their reunion in another realm. 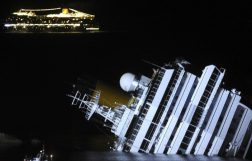 The result is a powerfully expressive work, because Nytch found effective musical means to convey each step of this emotional journey. And that emotional program, written from the composer’s heart, pulls the listeners in and reaches out to their hearts.

The concerto starts with a deep and foreboding prologue, with a ”churning,” the section title tells us, that could be the ship’s propellers swirling beneath the waves. This is followed by an impassioned cadenza that dramatically invokes the unity of player and instrument. Here Dusinberre became the ideal interpreter, playing with intensity and technical brilliance.

The next section of the work, titled “Dancing, lighthearted,” has hints of Eastern European rhythms and dances that Feher might have played, but without sounding like quotes of folk music or specific Gypsy tunes. The lighter mood gives away to ever more frantic fiddling until a furious climax is reached.

The remainder of the concerto contains the most arresting and original music of the piece. First there is a lengthy passage of utter emptiness, suggesting loneliness yet without despair. Borrowing from Dusinberre’s description, “there’s an extraordinary disembodied quality to it, (as if) the violinist ceases to be there, (leaving only) the sound of the instrument.”

Slow moving, tonal chords used to represent a sweet, consoling ending is one of the most obvious clichés of Western music, and yet Nytch makes them fresh and effective. The sheer beauty of the final section feels like the inevitable outcome of the concerto’s emotional journey. This, I thought, is the story that Nytch had to tell: not the specifics of Feher’s heroism and sacrifice, but a universal yearning for transcendence.

Dusinberre, more often heard as first violinist of the Takacs Quartet, was an inspired interpreter of the concerto. He had mastered the concerto’s many technical demands, playing with a consistency and beauty of tone. He easily soared above the texture, in spite of the sometimes urgent activity of the orchestra. Based on this riveting performance, I would like to hear him more often as a concerto soloist, if only his other far-flung commitments would allow it.

Katsarelis and the players of Pro Musica gave solid and committed support, ideally matching the composer’s moods. Before Costa Concordia, they gave an assured and well prepared performance of Bartók’s Divertimento for String Orchestra. Throughout, the different episodes from which the score is constructed were well characterized, all of the changes of mood clearly delineated.

They did not hold back for the more bumptious sections or the most piercing climaxes, which were well contrasted with moments of near silence. The Divertimento represented a satisfying performance of a piece that Katsarelis and the players obviously enjoy. Sometimes, that’s just what you want.