Elliot Moore and the Longmont Symphony are opening doors and exploring new frontiers this season.

This is Moore’s first year with the orchestra, and when he arrived last fall, he was the first new conductor of the LSO in more than 30 years. For Moore, who had never lived West of the Mississippi, the move to Longmont was a new frontier in itself. The season itself is called “New Frontiers,” and the same spirit carries over into the individual concerts.

The next program, to be presented at 7:30 p.m. Saturday, Feb. 24, in Vance Brand Civic Auditorium, will open with the world premiere of Mountain Myths for orchestra by Michael Udow. Not only is that a new work, it is also the LSO’s first collaboration with Udow, a Longmont resident.

Also on the concert will be the Cello Concerto No. 1 of Saint-Saëns, performed by guest artist Matthew Zalkind. This will be a kind of new frontier as well, since it will be a rare excursion into the French repertoire for the LSO.

The performance will conclude with Tchaikovsky’s Fourth Symphony, a well known staple of the orchestral repertoire, but one that Moore relates to new frontiers in contemporary society.

Mountain Myths was originally written for brass and percussion and premiered at the Music in the Mountains Festival in 2017. “It was for their opening concert last year,” Udow explains. “(They) wanted something that would celebrate the glorious mountains, a type of extended fanfare.”

Not long after the Music in the Mountains performance, Moore reached out to Udow and said he was looking for a new piece for the LSO to play that reflected Longmont and the Colorado mountains. Udow suggested he listen to Mountain Myths.

“I heard the brass version of it, and I thought it was great,” Moore says. “I commissioned him to make an orchestration of it, so this is the world premiere of the orchestra version.”

Udow says his inspiration came from the way that mountains figure in many different cultures, combined with the idea of communication from one peak to another. “It begins with an upheaval, from the bottom of the orchestra all the way through the top instruments,” he says.

“In my mind that was the emergence of the Rocky Mountains. There’s five brass players in the balcony, and the rest of the orchestra onstage, and there’s a back and forth” that represents calling from one mountain top to another.

But rather than listening for details, Udow hopes the audience will take a larger message away from the performance. “I would suggest that the audience experience the music for what it is,” he says.

“Hopefully there will be a sense of gloriousness about the area where we live and the beauty of the mountains, and that it’s not just showing up and being a face in the audience. (I hope) that some level of inspiration generates discussions about life and future generations and the well being of our planet.” 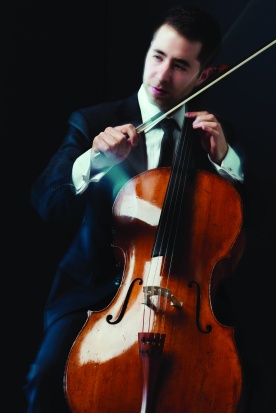 Moore recalls that he and Zalkind, the soloist for the Cello Concerto, met in New York around 2008, and both later went to the University of Michigan at the same time. Having heard Zalkind perform several times Moore is unstinting in his praise. And when he came to Longmont, he was pleased to learn that Zalkind is on the faculty of the Lamont School of Music in Denver.

“He is really an extraordinary cellist,” Moore says. “I said to myself, this would be fantastic to have him in our first year, as one of our soloists. So I was really happy that he was able to make this work in his schedule.”

The Concerto is not particularly long—about 19–20 minutes—but it’s a piece that Moore is excited to perform. “It’s a wonderful piece of music,” he says. “I think it’s a great concerto, and I think it’s going to be a really exciting performance. I’m really looking forward to working with Matt. He’s going to bring a lot to our performance.”

The final work on the program, Tchaikovsky’s Fourth Symphony, is a highly emotional work that was written during a crisis in the composer’s life. He had left a brief and catastrophic marriage that he entered hoping to quell rumors about his homosexuality. Unable to change his identity as a gay man, he had fled only a few days after the wedding. 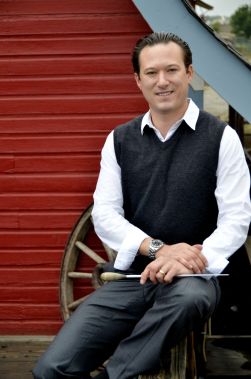 The symphony opens with a fanfare that the composer identified as “Fate, the decisive force that prevents our hopes of happiness from being realized and . . . is suspended over our heads and perpetually poisons our souls.” The meaning in the context of the composer’s life are clear, but nonetheless the symphony ends with a sense of victory in the final movement.

To Moore, the theme of fate and its resolution at the end reflect the composer’s struggle with his sexual identity, and his ultimate acceptance of who he was. “In some ways it’s an autobiographical account of ‘This is my fate,’” he says. “Accepting himself became the triumph at the end of the Fourth Movement.”

Moore put that struggle together with contemporary social issues when he heard a performance of the symphony in 2015. “The marriage equality act of 2015 had just passed, and I thought to myself, this music is more relevant now than when it was written,” he says. “Today, when gay rights and marriage equality are in the news, and all of these things go back and forth, I think this is a new frontier.

“So I think the symphony is actually very current. It’s been played a thousand times, but the context of the symphony now changes at least some of the meanings.”