Reading, playing Bach, and looking to the future of the Longmont Symphony

Elliot Moore is sitting in his home in Erie, where he is sheltering in place with his wife, his six-month-old daughter and four dogs, and he seems pretty happy there. 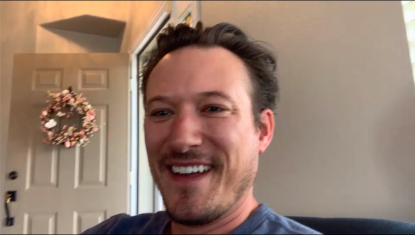 Elliot Moore, at home in Erie

“It’s actually been very nice,” he says via Skype. “It was really nice to have two weeks at least where it was pretty much me and my wife at home with [our daughter].”

Moore is the music director of the Longmont Symphony. His wife is a physician who does rehabilitation medicine, so she is able to do some of her work online. “She’s been doing telemedicine, but she has one facility that she sees that has COVID patients,” Moore says.

When she does go to see patients in person, she has a routine to keep the rest of the family safe. “She has clothes that she keeps in the garage,” he explains. ”As soon as she gets home she gets into clean clothes, immediately takes a shower, and then she’ll put on other clothes.

“She doesn’t want to bring any clothes into the house that have been exposed to patients who may have COVID-19.”

Apart from that risk, he is relieved that the pandemic hit when it did. “When I think about our daughter’s age, I don’t think we could be more lucky,” he says. “I am grateful that she won’t remember any of this. She doesn’t want to hang out with her friends, she doesn’t think her parents are annoying and dumb—thank goodness that we are her world and she doesn’t feel stuck at home.”

Other than entertaining her daughter and changing the occasional diaper, Moore has plenty to do. “I’m writing much more,” he says. “I have blog that I write, and I’ve called many of our symphony supporters and checked in with them to make sure that they’re doing OK.

“’I’m happy to say that they were all happy and healthy—maybe a little lonely, a little stir crazy, but besides that everyone’s fine.”

Moore works to keep from going stir crazy himself. “Everything seems to be changing on a daily basis, so at first I was really focused on things that I could control, mental health type things” he says. “Making sure that I’m OK, that my wife is OK, that our daughter is OK, that her parents are OK—that was my focus for probably for three weeks or so.”

He found that one thing he could control was playing music. “At the beginning, one of my coping mechanisms was to play the cello, maybe 30 minutes a day,” he says. “It was mostly solo Bach. I thought it would be really nice to have music in the house, have my daughter hear me playing the cello. I found it very relaxing and good for the soul to be paying Bach. 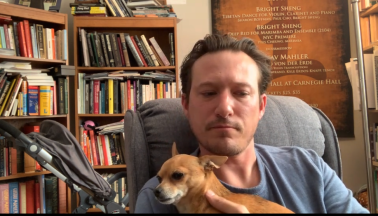 Elliot Moore in his study with one of his dogs

“Once I knew that everything was OK, I started thinking about what is next season [at the LSO] going to look like— programming, guest artists. I started getting more down to that kind of work. I’ve never had this much time to put together a season!”

The big challenge that Moore and the LSO are facing—along with every other orchestra and music presenter in the country—is uncertainty. “How will things be different when we go back?” Moore asks. “Our hall seats roughly 1300 people. Are we going to have to cap it at 500 people? At 750 people? How do we deal with all of that? Spacing between seats? And the musicians?

“These are all aspects that I think all orchestras are probably thinking about. But it changes so quickly that until we know more, we need to have this on our minds, to consider different options, and then when it comes closer to concert season, to be thinking much more seriously how we actually go about doing that.”

It appears increasingly likely that for many organizations around the world, sharing performances by video streaming is going to be part of the answer. Here Moore has valuable insight, having worked with the Detroit Symphony on live streaming concerts in the past.

There are many financial and contractual hurdles that have to be figured out, but there are also advantages that Moore sees coming from sharing concerts online, “For an orchestra like the Longmont Symphony, people may start developing an affinity for certain sections of the orchestra, and feel like they get to know [the players] through live streaming,” he says.

“One of the things I am happy that we have done in the last three years is to do videos. We have a YouTube channel, but it’s not enough to just stream the concerts. It’s like television, where there should be an interview with a musician behind the scenes during intermission.

“These are all critical aspects to making this successful, as I saw with the Detroit Symphony from the time that I was sitting in broom closet with two other people, to the state-of-the-art room that has been built. They bought, I think it’s 15 cameras and there’s a whole team. [Today] there’s close to 12 or 15 people making their live Webcasts happen.”

Another part of Moore’s routine under quarantine has been reading. “One of the things that I quickly started doing was reading books,” he says. He was particularly drawn to stories about conductors and other musicians who had gone through war, political oppression, and other struggles in their lives. “It was good for me to read about performing artists who had to weather the storm,” he says. “

There were plenty of other storms before we came along. So that did give me some perspective, I think.”