The Boulder Philharmonic Orchestra somewhat unexpectedly opens its 2019-20 season Saturday, Oct. 12, with music by two members of the Rock & Roll Hall of Fame, Jonny Greenwood of Radiohead and Jon Lord of Deep Purple. 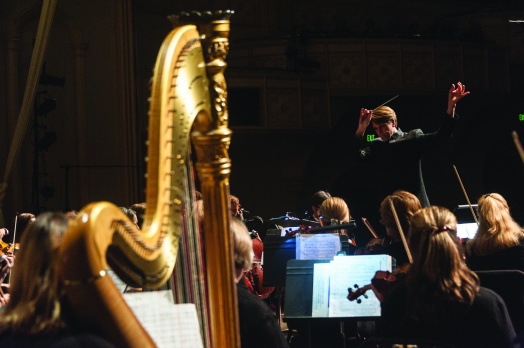 Michael Butterman with the Boulder Phil. Photo by Glenn Ross.

Or maybe it’s not unexpected. “That sense of experimentation, of providing something offbeat — that is part of our identity,” Boulder Phil music director Michael Butterman says. “This program adheres to the approach that we’ve taken of presenting well-known works from the classical canon along with pieces likely to be a surprise.”

The work from the classical canon in this case is Schubert’s Fifth Symphony. Written when the composer was only 19, it is a lively and pleasant work that reflects Schubert’s admiration for Mozart.

In other words, it is worlds away from the Rock & Roll Hall of Fame.

The program is titled “Gritty/Pretty,” of which the gritty part is the suite from Greenwood’s score for the brutal film epic There Will Be Blood. “I didn’t come up with the [“Gritty/Pretty” title], Butterman says. “That’s marketing, but I kind of like it. I think it’s appropriate.”

If Greenwood is gritty, Lord’s suite for flute, strings and piano, To Notice Such Things, is pretty. The suite comprises six movements that range from sweetly lyrical to fast and virtuosic in the flute part, which will be played by the Boulder Phil’s principal flutist, Elizabeth Sadilek-Labenski.

Johnny Greenwood: Suite from There Will Be Blood
Jon Lord: To Notice Such Things, Suite for flute, piano and strings
Schubert: Symphony No. 5 in B-flat major