The next concert by the Boulder Chamber Orchestra is titled “Earthly Delights,” but it’s not about the famous painting by Hieronymus Bosch.

“This is more of an atmosphere concert,” BCO conductor Bahman Saless says. “You’ve got Debussy and Ravel in a concert and their music conjures up impressions rather than emotions. So, I thought that was nice title to put there.”

The full program, to be performed Friday in Lone Tree and Sunday afternoon in Boulder (see details below), features Debussy’s Prelude to the Afternoon of a Faun and Ravel’s Ma mere l’Oye (Mother Goose) Suite. Also on the program are Mozart’s Overture to The Marriage of Figaro and Concerto for flute and harp, featuring BCO principal flutist Cobus du Toit and harpist Jennifer Ellis.

The keystone to the program is the Mozart concerto. “The main theme of the concert was the musical colors that are portrayed with harp and flute,” Saless says. “It’s not performed very often, and you have to have an excellent flautist and harp player. Then the question comes, what will I program it with?

“That’s really tough because you have to think, well, I’d better use the flute and harp maybe somewhere else. That’s where I decided that it might be good to putThe Afternoon of a Faun in there.”

Even that did not solve all the problems, though. Debussy’s atmospheric score is usually performed by a large orchestra with two harps, but the BCO’s venues did not have space for that many players. Saless found a version with the two harp parts combined into one, and with that version and the players squeezed into a tight space, they can make it work.

“Afternoon of the Faun has always been one of my ultimate pieces to conduct,” he says. Saless has never conducted a performance although it is, he says. “a staple of conducting aptitude tests,” and he has studied it in workshops. “If you can conduct The Afternoon of the Faun you are in a class of people that probably should say, ‘Hey, I conducted it.’”

“I’ve conducted it in workshops before, but I haven’t dared to do it in public,” he adds. 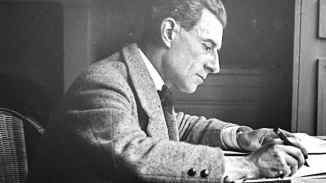 Ravel’s Ma mere l’Oye is another piece Saless learned in a conducting workshop “I really did not know anything about it until last summer, where I also got exposed to it in a workshop,” he says. “It’s one of the most delightful pieces that I know, and we’ve never performed Ravel. He doesn’t have many pieces you can perform with a chamber orchestra. This is one of them, and I’m totally excited about performing it.”

Apart from it’s musical pleasures, Saless chose Ravel’s score—“Mother Goose Suite”—in a punning tribute to Mother’s Day, the date of the Boulder performance. “It does have five movements that are like little stories that we know. It fits a family concert atmosphere, which I was planning to put out there for Mother’s Day. So I’m hoping that if mothers come with their kids, they will enjoy the ‘Mother Goose Suite’ as much as the mothers do.”

The five movements of Ma mere l’Oye, all derived from better or lesser known fairy tales, are “Pavane of Sleeping Beauty,” “Tom Thumb,” “Empress of the Pagodas,” “Conversation of Beauty and the Beast,” and “The Fairy Garden.”

“The last movement is a gorgeous piece of music,” Saless says. “Ravel is an amazing composer, but he doesn’t usually touch you so deeply emotionally (as this movement), just because of the style of impressionist music. The last movement is just so beautiful!

“And the colors! The whole concert is colors. The conductor has the biggest challenge in that every few bars have to show a different color, and that’s just really fabulous.”

Mozart: Overture to The Marriage of Figaro
Mozart: Concerto for flute and harp
Debussy: Prelude to the Afternoon of a Faun
Ravel: Ma mere l’Oye (Mother Goose)