Conductor Cynthia Katsarelis will celebrate the 500th anniversary of the Protestant Reformation with the Pro Musica Colorado Chamber Orchestra, because it was a major turning point in European history—and because, she says, “there’s not that much for a classical symphony to celebrate 500 years!”

True enough: orchestral music only goes back a little more than 300 years.

The theme of the program goes beyond the Reformation itself to the idea of “liberation,” by which Katsarelis means freeing the mind from old ways of thinking. “In the big arc of history, the Reformation was a turning point in terms of people being able to follow their conscience,” she says.

The concert celebrates the anniversary of the Reformation through J.S. Bach’s Cantata No. 80, based on the Lutheran chorale tune Ein feste Burg ist unser Gott (A might fortress is our God), with words by Martin Luther. St. Martin’s Chamber Choir joins Pro Musica for the cantata, one of Bach’s most significant sacred works. Soloists will be soprano Jennifer Bird-Arvidsson, alto Leah Creek Biesterfeld, tenor Steven Soph and baritone Adam Ewing.

Other works on the program will be “Raucous Rumpus: A Fanfare” from Dance Card by Jennifer Higdon; Haydn’s Symphony No. 85, nicknamed “La Reine” (The queen); and the world premiere of “Marantha” by Elena Specht, winner of the CU Composition Competition.

The Boulder performance will take place in a location that Katsarelis has chosen as an ongoing venue for Pro Musica: The Mountain View Methodist Church, 355 Ponca Place in Boulder, which has its own parking lot—a welcome convenience in Boulder. 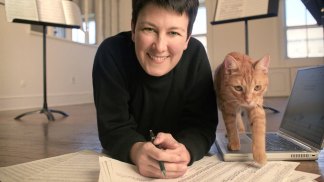 Higdon’s complete work Dance Card comprises five dance pieces, of which Pro Musica is doing the first, “Raucous Rumpus,” to open the concert. “It pretty much sounds like the title,” Katsarelis says. “It’s fast and fun and it’s very conversational between the sections of the string orchestra. The movements all make really good concert openers or closers, so I think we will end up doing them all over time.”

Higdon’s music relates to the title of “Liberation” in two ways, she says. “Higdon’s style uses jazz inspired things, and you didn’t do those dances in polite society at one time, and also being a woman composer. I would say that the inclusion of Jennifer Higdon’s piece and Elena Specht’s piece, are part of the liberation.”

“La Reine” is at least the sixth or seventh Haydn symphony Pro Musica has presented. Haydn’s works are “the core of our repertoire,” Katsarelis says. “Everything came out of this, in terms of symphonic writing. What’s so interesting, is that he wrote so many (symphonies) but they don’t all sound alike. This one is a beautiful, charming piece.”

One of Haydn so-called “Paris Symphonies, No. 85 was written around 1785 for performance in the French capitol. The title comes from the fact that it was supposed to have been a favorite of Marie Antoinette. It includes numerous references to French musical style, including variations on a French folk song, Ma gentille et jeune LisetteI (My lovely young Lisette).

Bach’s Cantata No. 80 calls for a small orchestra with four-part chorus and four vocal soloists. It is not an easy assignment for the singers, as their parts are complex, often chromatic, and highly contrapuntal. But Katsarelis feels she has the ideal partners in St. Martin’s Chamber Choir, a highly selective, professional, vocal group in Denver.

Although Bach’s cantatas don’t often get performed in concert settings,  Katsarelis would like to do more of them. “The cantatas are just so fabulous,” she says. “These are just gems of the repertoire that should be played.”

Specht’s piece was written as a companion piece to the Bach. Katsarelis says that the connection between the two works is conceptual, and does not involve any direct quotes of Bach’s music. “Specht calls Marantha the story of hope and the ultimate victory of goodness,” Katsarelis says. “It’s a short piece, and it does a very good job of exploring darkness and light. The darkness and light motive is also very, very prevalent in the Bach: the victory over Satan and sin.”

The duality is reflected in the title Marantha (sometimes written “Maranatha”), an Aramaic word that can be translated either as “Come, Lord” or more positively, “Our Lord has come.” In her program notes, Specht connects this binary division of meaning to the modern world, as “the destructive forces of natural disasters alongside the astounding beauty of the natural world, and incomprehensible acts of evil side by side with bravery, compassion and kindness.”

Katsarelis applies that theme to the concert as a whole. “It’s a concert that takes us through darkness and light, and what the Higdon does is add American optimism,” she says. “The experience of the concert will be a kind of a liberation of spirit and mind for one evening.”