Superstars—and there are some in the classical music world—sell out concerts on the basis their names alone. 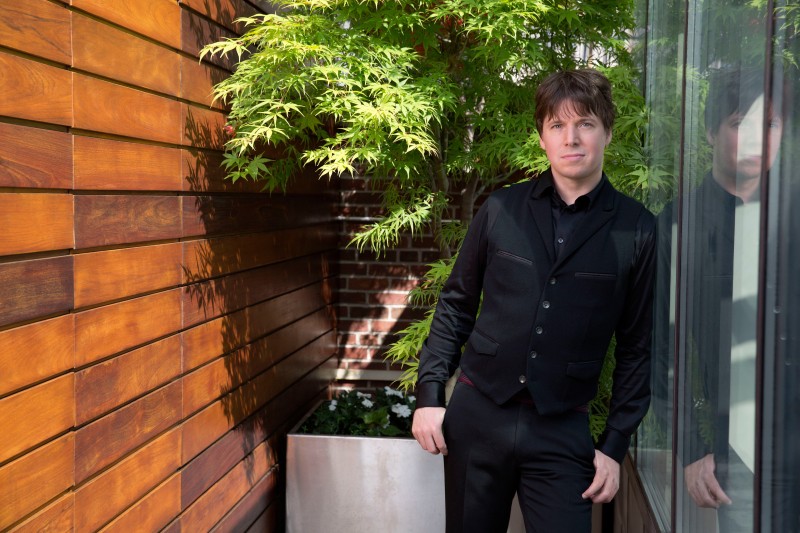 A year ago, it was Yo-Yo Ma, who sold out a recital in 2000-seat-plus Macky Auditorium long before the performance. This year, Josh Bell has done the same for his upcoming performance with pianist Sam Haywood (7:30 p.m. Friday, Feb. 9). Even though you can no longer get tickets, the program and the event itself are still worth thinking about. I recently spoke with Haywood for his perspective on various aspects of the performance.

Although Bell came to fame as a teen prodigy, Haywood didn’t know him then. Of course he’s aware of Bell’s history, and he see vestiges of that experience in Bell’s playing still. “He manages to keep the freshness and the vitality of that early period (of his life),” he says. “The energy is very much there, and it’s certainly a great pleasure to work with him.”

Bell and Haywood work together not as star and accompanist but as chamber music collaborators. For example. they often discuss potential concert programs together. “Because he’s so super busy, it has fit in practically, it has to be something that he has time to work on,” Haywood says.

On the other hand, the Strauss Sonata on the Boulder concert was originally something Haywood wanted to play. “We played the Strauss before, and I think the first time was at my suggestion,” he explains. “I always wanted to play the Strauss (because) there’s not a great deal of solo piano music by him.”

Of course Haywood understands that the audience is likely to think of Josh Bell as the star, especially since the concert is billed that way: “Joshua Bell” in large type (no instrument listing necessary), followed by “with Sam Haywood, piano” in small type. But he resists being stereotyped in a subsidiary role.

For the audience “to approach it as if they’re coming to hear a great star with background piano—they will only get 50% of the music,” he says. “I think that’s a shame, because how you prepare yourself to listen is always important. When we play at Carnegie Hall they have us in equal billing. I think when people see that, they think, ‘Aha! We’re going to see a duo performing!’”

It is useful to know that Haywood does far more than tour with Josh Bell and other solo artists. His career includes solo recitals as well as chamber music, he has founded a music festival in England and composed a children’s opera, among other works. He is fascinated with historical keyboard instruments, and has recorded a CD of music by Chopin on the composer’s Pleyel piano (available through Amazon UK).

YouTube videos of Haywood playing historical instruments can be seen here and here.

“I’m very conscious of not wanting to be pigeon-holed,” he says. “I’m just a musician, a music lover, and I love to play all kinds of different repertoire. I was just playing some Wolf lieder with a wonderful soprano, and it’s all just wonderful music to be able to immerse ourselves in.”

One fascinating aspect of the program that Bell and Haywood are playing in Boulder is the way it illustrates the changing character of music for violin and piano over about a century, including a shift in the relationship between the two players.

When Mozart wrote his Sonata in B-flat major in 1784, music for that pairing of instruments was often described as an “accompanied piano sonata,” with the violin in the secondary role. This reflected the fact that Mozart and other composers of the time were first and foremost keyboard players who might perform with students and amateurs who played violin.

Schubert’s Fantasie in C major was written to be performed privately among friends—in a salon, for something like a house concert. Although the piece definitely has some strong, expressive moments, it was largely intended for intimate music-making between friends who would have been on equal footing as players.

The Strauss Sonata, on the other hand, is much more of a concert piece. By the time it was written in 1888, touring virtuosos were common, and Strauss would have expected it to be performed for a public audience, in a concert hall. This music comes closer to being for soloist with accompaniment, although Haywood points out that the sonata is “a lot to get your teeth into” for the pianist. “It’s very orchestral. The textures, the colors, they’re all very vivid. It works very well in a large hall.”

Which is the final issue we talked about. With the Mozart and the Schubert, music written for small spaces has been taken into a very large hall. That significantly changes the relationship between the performers and the audience.

“It’s very, very difficult,” Haywood says. “ I think you approach the piece in a slightly different way, because you’ve got to think of the poor people right in the back. They’ve got to hear it as well. You’ve got to really be conscious of projecting and painting in quite bright colors.”

He also noted that he has “learned a lot about playing in large halls through playing with Joshua. When we first started to play (together) I hadn’t played in the 2,000-seater (halls) before, and he has this wonderful way of projecting his sound and his personality, with such intensity that he can hold a large number of people.

“That’s something I’ve learned from him.”