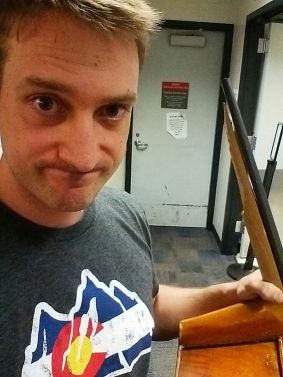 The nightmares for double bass players just got a lot worse.

There has been another incident involving a double bass and travel, but this one is more troubling than most. You may recall that about a year ago, bassist Ranaan Meyer of Time for Three had his instrument refused by U.S. Airways and had to fly another airline to get home from a performance on “Dancing with the Stars” in Los Angeles.

This time it’s much worse, and closer to home for Colorado musicians: Bassist Karl Fenner of the Colorado Symphony was returning home to Denver by Southwest Airlines from a successful audition with the Atlanta Symphony. As reported in Strad Magazine today (Sept. 17), he had checked his bass into the hold, as is required for double basses. He has a heavy-duty fiberglass case that he has used safely for 11 years of travel, but this time when he arrived, he found that the top of the case had been smashed open and the neck of the bass had been sheared off below the scroll.

Fenner posted photos of the damage on his facebook page, with the comment “Thanks Southwest Airlines and or TSA Atlanta. I’ve trusted you with my baby for 9 years and then this. The heavy duty case was heavily damaged too. Very disappointed. How?”

The accident happened on Wednesday (Sept. 16). Fenner had been through three rounds of auditions in Atlanta, and was the top choice for the two open stringed bass positions with the orchestra. (Two other players will vie for the second position.) He was offered a contract on the spot, and so he left Atlanta in great spirits.

When he returned to Denver, the bass did not show up in the oversize luggage carousel. After waiting a few minutes, he walked into the airline’s baggage claim office, where he saw the case immediately.

“It was there for me, because obviously they noticed that the case itself was incredibly damaged,” he said. “My heavy-duty protective travel case was damaged, and they wanted me to open it up. When I opened it up and took [the bass] out of the case, I could feel it before I even took it out of the inner case. The neck was completely snapped in two.

“It was certainly not a good feeling. It was made slightly better by the fact they were quite helpful. They took a lot of pictures of all of the evidence themselves to put into my files.”

Normally, a fiberglass travel case is almost indestructible. One possibility that the airline suggested was that the case had fallen out of a baggage cart or fork lift and had been run over.

Fenner continues to be in contact with Southwest Airlines. “I received a private message on facebook saying ‘please call me, we really want to make this right with you,’“ he says. “I talked with [an airline representative] for about 10 minutes today. We haven’t gotten very far in the process yet, but she did admit that it is obvious that it is the airline’s fault, and nobody on their end is going to dispute that.”

Fenner estimates that a good quality travel case for a double bass costs about $3,000, and the instrument, which he has had for nine years, cost more than his car. The instrument itself is insured through the Colorado Symphony. It can be repaired, to the extent that a new neck and fingerboard can be grafted onto the body. There is always a risk, though, because there is no guarantee that with such extensive repairs, the instrument will feel the same to the player.

“I know musicians who’ve had damage done to their instrument and they’ve been able to get it repaired, but it was just never the same,” Fenner says.

Repairs will probably take several months. In the meantime Fenner has the possibility of using other instruments, both in Denver and in Atlanta. He will continue to play with the Colorado Symphony during the fall, and plans to join the Atlanta Symphony after the first of the year.

Further updates to Fenner’s story will be posted here as appropriate.

While the damage Fenner’s instrument sustained is an exception, it is not without precedent. One bass player I spoke with reported seeing a $200,000 bass in a repair shop with damage similar to Fenner’s: “The neck had been sheered off because the case had been left hanging out of the truck and passed through a door.”

Beyond such extreme situations, bass players always face challenges when traveling with their instruments. Recent regulations mandate conditions under which airlines must take smaller instruments, including violins and violas, into the cabin. Cellists usually purchase an additional seat for their instruments to travel with them. But string basses are too large to go into the cabin and must travel in the luggage compartment. Here the regulations seem not to be applied consistently, as Meyer’s adventure last year showed.

Several bass players told me stories of frustrations and setbacks when traveling. They did not want their names used, for fear of future difficulties with airline employees, but agreed to have their stories reported.

“It’s always been dodgy traveling with a bass,” one of them said. “It seems as though it is arbitrary depending on the day and the whim of the pilot or manager behind the desk. If the player has a history of traveling with the airline already, there have never been issues, and more travel is planned, there is no excuse for inconsistently applying a policy arbitrarily.”

A professional bass teacher and soloist reported to me that he no longer takes his instrument on airplanes at all. He once went to Europe with his bass, but was not allowed to bring it back on the same airline that had taken it on the outbound flight. The gate agent suggested he call FedEx.

“When you travel with a bass, you have nothing you can do against the will of the person behind the desk,” he said. “I’ve stopped traveling with my bass internationally and always choose to drive if the distance allows domestically. I just performed a concerto with an orchestra (overseas) on a completely foreign bass. I only had two days to get used to the instrument. Is that really my preference? No. Do I have a choice? Once again, no.”

Ironically, the airline that bass players all agreed was the easiest to work with is Southwest Airlines.