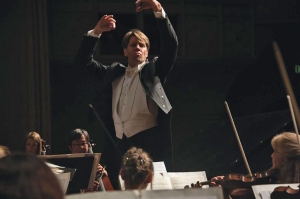 The Boulder Philharmonic opened its 2015–16 season last night (Sept. 13) in Macky Auditorium with an intriguing mix of ingredients that added up to a well balanced—and well received—program.

Music Director Michael Butterman, returning for his tenth season with the orchestra, opened the program with Ravel’s Mother Goose Suite. The unusual addition of two soloists filled out the program, with the orchestra’s concertmaster, Charles Wetherbee, performing The Storyteller by Korine Fujiwara, a concerto for violin and strings that was written for him; and Venezuelan pianist Gabriela Montero playing Rachmaninoff’s massive Second Piano Concerto.

The two concertos provided a nice contrast. Fujiwara’s Storyteller is a lovely, cheerful piece very much in the playful spirit of the Japanese fairy tales they portray, while Rachmaninoff’s Second Concerto is one of the great virtuoso challenges of the pianist’s repertoire. The two pieces balanced one another nicely, and the Ravel added an opening touch of color that was very engaging.

Butterman and the orchestra presented Ravel’s original suite of five movements—“The Pavane of Sleeping Beauty,” “Tom Thumb,” “Empress of the Pagodas,” “Beauty and the Beast” and “The Fairy Garden”—and not the seven-movement ballet suite that the program listed. The performance was marked by delicate playing from the winds and a sense of magic that is largely created by Ravel’s brilliant sense of orchestral color.

After fulfilling his concertmaster duties for the Ravel, Wetherbee left the stage and returned in a dark red jacket that somehow evoked the storyteller of the concerto’s title. The piece opens with a long, genial violin solo, as if Wetherbee were saying “Come, gather around, and I will tell you stories of magic and wonder.”

After this inviting opening, played warmly by Wetherbee, the concerto goes into a largely episodic series of scenes that sound descriptive—of what being largely left to the imagination of the audience, even though Fujiwara had mentioned earlier that there were slamming doors, cicadas and battle scenes within the score. The various moods and characters are colorfully evoked by the string orchestra.

A string player who knows well how to write for the violin, Fujiwara fills the solo part with graceful lines and ornamented passages that always seem purposeful. There is no great momentum developed; it is more as if there is some mysterious purpose unfolding, but one that lacks deep threat or tumult.

A special word should be said for the slow movement, where Fujiwara honors the many maltreated women of folk legends with music of gentle, compassionate beauty. Wetherbee played with great sweetness of sound and sure technique. Though lacking bravura display, The Storyteller is an accessible and charming concerto that would create a welcome moment of comfort next to more dramatic fare.

Montero gave a steely, powerful performance of Rachmaninoff’s concerto. Although I found her sound hard-edged in the louder passages, her dynamic control was impressive, ranging from thundering octaves to delicate, whispering filigree. She showed great technical control of Rachmaninoff’s most fearsome passages and created an exciting sense of momentum for the climaxes.

The orchestra under Butterman played with a fullness of sound, but without the plush cushion of strings that best suits Rachmaninoff’s Romantic score. In the loudest passages the brass dominated the sound, and elsewhere the string section is not quite large enough to pull off the rich sonic embrace that larger orchestras can create. There were a few moments of push and pull between pianist and orchestra, perhaps the result of short rehearsal times. Mostly it was not obvious, except when Montero ended the first movement just ahead of the orchestra.

All shortcomings aside, the performance built to a splendid finish, and Boulder’s delighted audience answered with loud cheers and a standing ovation. After several bows, Montero came on stage with a microphone and said that she would like to improvise her encore. She explained that she has improvised since childhood, telling stories in music, and that it seemed to happen without her knowing how. “I am very much a witness,” she said, “as are you.”

She asked for a tune from the audience, and one person offered “Row, Row, Row your Boat”—actually a brilliant suggestion, since the simplest melodies provide the greatest scope for creative variation. After playing the tune alone three times while possibly working out an idea or two in her mind—unconsciously?—Montero launched into a remarkable seven or eight minute expansion of the well known tune, filled with surprising key changes, unexpected textures, sudden appearances of the unadorned tune, and a dazzling variety of sounds. A sudden turn to a lilting, swingy style drew chuckles form the audience before she ended with a final brash flourish.

This was as stunning a display of improvisational brilliance as I have ever heard from a classical pianist—and then some. The encore alone was well worthy of the standing ovation; I would happily have stayed for many more.