The times they are a-changin’ for classical music in Boulder 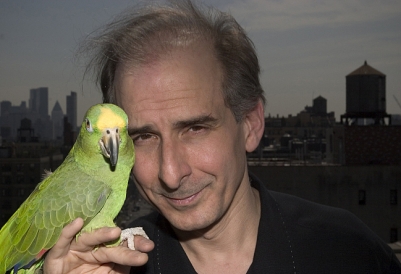 “The Piano Puzzler,” Bruce Adolphe (shown with his parrot, Polly Rhythm), comes to Boulder’s Dairy Center for two performances of his music.

Concert music is a growth industry in Boulder.

It used to be that there just weren’t any classical or new music concerts in Boulder in late May and June—between the end of the standard concert season and the beginning of the summer festival season. It also used to be that the Dairy Center only offered the odd concert once or twice a year.

But not any more. The Dairy’s new “Soundscape” series has made it a major venue for concert music in Boulder, and this year that continues right into June, when the Dairy is offering two concerts of classical and new music in three days: the final event of the 2014–15 “Soundscape” series at 4 p.m. Sunday, June 21, featuring the Miami String Quartet; and “One Night Only,” a concert of music for mezzo-soprano and instruments at 7 p.m. Tuesday, June 23, with soloist Abigail Fischer.

Both concerts will feature the music of composer Bruce Adolphe, who will be in attendance. Adolphe is a composer, educator, performer and author who lives in New York, where he is resident lecturer and director of family concerts for the Chamber Music Society of Lincoln Center. Among other professional and educational activities, he is also the Piano Puzzler for “Performance Today” on public radio.

These concerts are presented in partnership with the Off the Hook Chamber Music Festival in Ft. Collins, where Adolphe is co-artistic director with Jephta Bernstein. Both programs will also be part of the Off the Hook season this summer. (More information Off the Hook is available here.)

James Bailey, the director of the Dairy’s Soundscape series, commented that sharing these two programs with Off the Hook provides “a unique opportunity for Boulder because these are not groups that we would ever be able to afford (as a separate performance)—we don’t have to fly them in, we don’t have to house them.

“It was a real opportunity for us to hear really outstanding talent and great programming, so I jumped on the chance.”

Adolphe’s oddly titled piece is based on an incomplete fragment of a movement for string quartet by Franz Schubert. It was part of a project commissioned by the Brentano Quartet to celebrate their 20th anniversary, comprising six works by six composers, each based on a fragment by another composer.

“It’s not pronounceable,” Adolphe says of his title. “It occurred to me visually and I decided to leave it. Schubert gives you the Franz and the piece is a fragment, so you’ve got a fragmentation and a Franz. It’s kind of a ridiculous title and I tend to call it my Schubert Fragment Piece.”

When he starting composing his Schubert Fragment Piece, Adolphe found that he was becoming obsessed with the tune and decided to use that obsession productively. “It was almost like an earworm,” he says. “I really couldn’t get rid of it, and at one point it occurred to me if I wanted to be really interesting maybe the piece should be about being obsessed with the melody and trying to get it out of your mind.

“I started with the tune swirling around, and new rhythms, and I sort of let the tune get to the point where the listener also finds it obsessive. Then it splits into fragments itself, which is another way of dealing with the word fragment, and finally comes to an end that is not conclusive—but at least you get a break from the melody.”

The artistic focus of the June 23 concert will be Luciano Berio’s Folk Songs. Composed in 1964 as a tribute to American singer Cathy Berberian, who was known for her performances of contemporary music, it is based on nine folks songs from several European countries, plus two folk-like American songs by John Jacob Niles (“Black is the Color of My True Love’s Hair” and “I Wonder as I Wander”). In these arrangements, Berio created an accessible work that joins contemporary elements with simple melodies.

“There are folk songs from all over—Italy, America, France, Armenia, Azerbaijan,” Abigail Fischer, the soloist for Folk Songs, says. “Berio brings new life into these pieces. Each has its own personality based on his orchestration and interpretation of the (song’s) character.

“Each song has a slightly different way of singing as well, in order to encapsulate the character of each region. (For example,) the song from Sicily is very guttural and almost sounds like a folk song from Central Asia with the orchestration that Berio chooses.”

Fischer is known for singing contemporary music, and she has also performed a great deal of Baroque opera and other early music. Today she finds herself wishing to sing more of the standard vocal repertoire as well.

“I originally fell into singing Baroque music and contemporary music because I was trained as a cellist and already very experienced with the sophisticated musical sensitivities of these styles,” she says.

“This is probably why I fell into singing more Baroque and new music, because not as many singers really do this well. However, as my voice grows and matures, both materially over time, and as my technical knowledge of how to work with my growing voice increases, I desire more and more to also sing standard repertoire.”

Performing with Fischer on the Berio will be a number of musicians from the Boulder, Denver and Ft. Collins area: Erik Peterson, violin; Brook Ferguson, flute; AnnMarie Liss, harp; Deborah Marshall, clarinet; Judith McIntyre, cello; and Eric Hollenbeck and Mike Tetrault, percussion. Other works on the program will be Rikudim for flute and harp by Adolphe; Jet Whistle for flute and cello by Villa Lobos; and Steve Reich’s New York Counterpoint for clarinet and tape.

The times they are a-changin’.