First it’s serious, and then it’s not; then it seems not, but it is.

That’s more or less the way Bahman Saless, music director of the Boulder Chamber Orchestra, describes Beethoven’s Fourth Symphony. Saless and the BCO end their 2014–15 season with that energetic symphony, Saturday in Broomfield and Sunday in Boulder (May 9 and 10, both concerts at 7:30 p.m.; details).

In addition to Beethoven’s symphony—one that is less well known than the Third or the Fifth or Seventh or Ninth— the program features the rollicking Overture to La Scala di seta (The Silken Ladder) by Rossini and Chopin’s Second Piano Concerto, performed by soloist Hsing-ay Hsu. This adds up to a comfortable and enjoyable evening—a humorous Rossini overture, an elegant, decorative piano concerto, and a cheerful Beethoven symphony that Robert Schumann compared to a “slender Greek maiden.”

I’ll get back to Beethoven and that Greek maiden in a moment, but first the concert opens with the overture by Rossini. It is easy to think of all of those bubbly Rossini overtures as being almost interchangeable, but Saless had a reason for choosing the one he did.

“I picked La Scala di seta because we’ve done many of the other ones, and this one seemed just fun to do,” he says. “I listened to three or four of them and I thought it fits the character of this concert, just because it’s kind of comical.”

Next on the program will be Chopin’s Piano Concerto No. 2—actually the first to be written, while the composer was still studying at the Warsaw Academy and first performed in 1830. It is not modeled on the heroic concerto of Beethoven and the later 19th century, but is more lyrical, decorative and free-flowing.

The concerto was the choice of the soloist, Hsing-ay Hsu. “I think that every great composer has his own voice and there is a lot of poetry in Chopin. It’s emotionally very approachable, and for an audience to experience that kind of soaring and that kind of blissful energy is a great experience.”

Poetry suggests a certain freedom for the soloist, which Hsu identifies as the greatest challenge of the concerto. “What I find really challenging is that on one hand it has to feel completely free and improvised, and on the other hand the rhythmic integrity is very important,” she says. “There’s the sense of very long-reaching lines and having that flexibility within this larger structure is something that is really exciting and really challenging at the same time.”

That flexibility is in turn a challenge for the conductor, who has to follow the soloist without constraining her expressivity. “The pianist can take all of these elaborations on every phrase, with a lot of freedom if they want to, so the rubato (alteration of tempo) is going to challenge any conductor to make sure they play together,” Saless says.

Because he wrote the concerto before leaving Poland, Chopin did not have the Parisian drawing room in mind. In fact, Hsu hears a lot of the composer’s native culture in the music.

“I think of the third movement as a mazurka,” she says, referring to a Polish folk dance. “You might not dance to it because it’s quite complex music, but I think that understanding the rhythm is crucial to the performance, and having that feeling of lifting your dress up and twirling and all that is part of the character of the third movement.

“I think it’s music of the people. It’s a movement that’s meant to be a joyful family gathering.” 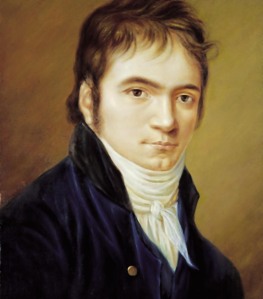 Beethoven around the time of the Fourth Symphony. Portrait by Christian Horneman.

After intermission it’s time for Schumann’s “slender Greek maiden,” a phrase suggesting that Beethoven’s Fourth Symphony is graceful and ingratiating, and avoids the drama of some of his music.

But maybe not. Saless sees far more going on in the symphony than the cheerful surface Schumann describes. “It’s a crazy piece,” Saless says. “It’s lighter and folksier, but at the same time in many ways crazier than even the Third Symphony, in the sense that he’s just pushing the boundaries and experimenting with extremes.”

Saless points to the very beginning of the symphony. It opens with a very somber slow introduction that seems to be building to a dramatic climax when suddenly, a fast and bumptious allegro seems to explode out of nowhere.

In other words, first it’s serious and then it’s not.

“Beethoven tries at first to kind of fool you into thinking this is going to be a serious piece of music,” Saless says. “The first 12, 15 bars is very serious. You think ‘Oh my God, what’s going to happen,’ but then suddenly, brrum! It’s like a horse race!”

Saless compares this beginning, seeming so solemn before bursting into a raucous romp, to Beethoven’s private piano recitals, when he would practically mock his audiences. “He would perform something and purposefully make the music deep,” Saless explains. “Everybody was drawn in, their complete attention was to the music, and then he would suddenly stop and laugh at them!”

The slow movement moves in another direction, from placid beauty to something more troubling. “I think the slow movement has a lot more depth than people have thought,” Saless says. 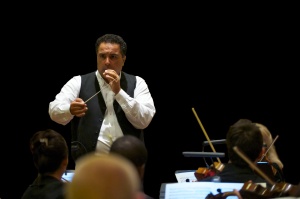 The movement is dominated by one of Beethoven’s most serene melodies. It seems perfectly calm, but it is accompanied by a constant rhythmic figure that, to Saless, represents the composer’s heartbeat. “Why would you put that against this legato melody?” Saless asks. “He obviously wants to keep you unsettled.”

At one point, the heartbeat figure takes over completely, and is played in unison and forte by the whole orchestra. “It seems like the whole idea of this beautiful melody gets dropped and he’s really concerned about his heart,” Saless says. “What’s that about? It’s nothing musical, it’s not fate knocking on the door, it’s just really amazing.”

So now it doesn’t seem serious, but it is.

After that, the last movement poses virtuoso challenges to the players, but refreshingly few complications to the audience. It moves like the wind from beginning to the end, and is one of the great movements of Beethovenian exuberance. It is, Saless says, “as showoff a piece as anything, if you can pull it off!”

Making a great ending for a concert or a season.