Concert performance of Bizet’s Carmen is a big undertaking 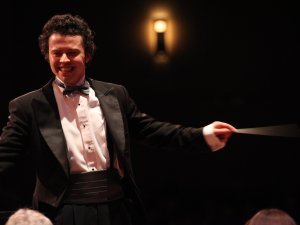 Under the zingy title “Love’s Arrow,” the orchestra and conductor Devin Patrick Hughes will present a semi-staged performance of Bizet’s Carmen—the first time they have undertaken an entire opera. Featuring a cast of mostly local singers, Carmen will be performed at 7 p.m. Saturday, May 9, in Boulder’s Symphony usual home, the First Presbyterian Church in Boulder (see cast list below).

Putting an opera into a church is a challenge, but Hughes has found a way to make it work. “There’s a lower stage and a higher stage, and the lower stage is almost like a pit,” he says. “It’s not low enough (to be a real pit), so balance is a little bit of an issue, but we have a slightly reduced orchestra to account for that.”

The singers, on the higher level, will be dressed mostly in black, with only a few other elements of costume and a few props. There will be minimal stage direction by Michael Travis Ringer, who also has a role in the opera.

“We are focusing on the music and the drama of Carmen, which of course are my favorite elements,” Hughes says. “We’re a small organization made up of mostly volunteers, and this is a big and exciting undertaking. We’re really blessed to have highly seasoned singers who have done (their roles) before.”

Semi-staged and concert performances of operas have become more common for orchestras in recent years, but there have been relatively few in Boulder. The most recent I could find was a concert performance of Ainadamar by Osvaldo Golijov at the Colorado Music Festival in 2007, and the CMF is scheduled to perform Bartók’s Bluebeard’s Castle July 23 and 24 as part of the 2015 summer festival.

In case you don’t know the story, love’s arrow is fatal in Carmen. The naive young soldier Don José falls for Carmen, a feisty and independent gypsy woman whom he is supposed to arrest. Instead he lets her escape, and after serving time in jail he joins Carmen and the band of smugglers in their hideout. By then, Carmen has fallen for another man, the handsome torreador Escamillo. In a fit of jealousy, Don José confronts Carmen, with fatal results.

“For me, this opera is all about woman power,” Hughes says. “Carmen gets killed in the end, but she dictates the entire course of events. She’s totally in control of the entire story, to the point that she goes the way that she wants to go and all the male characters are pawns. I think society has been catching up to Carmen for the last 150 years.”

But of course the plot is only one part of the opera. “What drew me to Carmen initially is not the story but it’s how the music conveys the story,” Hughes says. “To me the music is just as powerful as the character of Carmen and Don José.”

The musical appeal makes Carmen an ideal first opera for audiences. Many of the melodies are familiar—such as Escamillo’s “Torreador’s Song” and Carmen’s “Habanera”—and the rest of the score is equally tuneful. 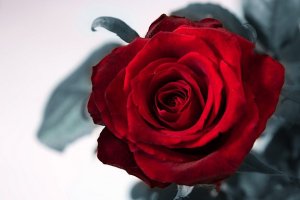 “I would aim (the performance) at people who know these themes, and would like to experience this for the first time and see the entire version,” Hughes says. “That’s what the Boulder Symphony is. We’re trying to build excitement for classical music, which includes opera and orchestral works.”

Hughes believes that opera is a greater challenge for Boulder Symphony than most orchestra programs. “We’re trying to expand on what we’ve done in the past,” he says. “Operatic literature is incredibly difficult for orchestras, because the tempos are changing constantly, you’re having to not only watch the conductor but listen to the singer.”

This expanded challenge to the players is one reason Hughes is wants to perform opera with the Boulder Symphony. Another is what it can mean for the audience: “You hear symphonic music all the time and you hear these cadences and these chord progressions. Opera actually puts a human emotional element (on those sounds). It tells you exactly what that music is saying.”

Hughes and the Boulder Symphony will perform Carmen with spoken dialog between the musical numbers. This is the original version of the opera, which was written for the middle-class audiences of Paris’ Opéra-Comique rather than the aristocratic audiences of the Grand Opera. In this way Carmen is more like a Broadway show, which also enhances its appeal to audiences by making the story easy to follow.

Although Boulder Symphony’s next season has not yet been announced, Hughes lets drop a hint: “Carmen is the first of a planned multi-year operatic exploration,” he says, suggesting there will be other semi-staged operas in the future.

But in the meantime there is Carmen. “When you say Carmen, everybody gets excited,” Hughes says.

To share the excitement, you may purchase tickets here.