The Crisis in Classical Music: Latest thoughts and developments

In 2014, almost all stories about classical music have a subtext: crisis.

The crisis boils down to two trends: the increasing cost of doing business—salaries, facility and production costs—combined with decreasing income—aging and shrinking audiences, loss of revenue from tickets and recordings, declining contributions. Just about all of our classical music institutions have to address both trends.

Sometimes the crisis is the actual subject of media stories, as in my earlier post about financial issues at the Metropolitan and other opera companies around the country. But whether previewing concerts at the Colorado Music Festival, discussing candidates for CMF music director, or previewing the 2015 season at Central City Opera, that crisis is always part of the story.

Several recent articles I have seen touched directly on the crisis and the future of classical music:

Controversy continues to rage about the claim by Metropolitan Opera general director Peter Gelb that the Met has to retrench because opera attendance is falling everywhere. While Gelb’s remarks are partly a negotiating tactic aimed at the powerful musicians’ and stage hands’ unions, they touched issues that many people have been thinking about.

They also aroused a whole hornet’s nest of responders. One commentator known for his gossipy style, Norman Lebrecht, even accused Gelb of lying. Arts blogger Greg Sandow, who writes explicitly on the “the future of classical music,” gave a measured response to the furor that—having actual facts and figures about classical audiences—is definitely worth a read.

Elsewhere, the Wall Street Journal had its own appraisal of Gelb’s remarks, and several other bloggers joined the fray, here and here. There’s more, if you are willing to search the internet. 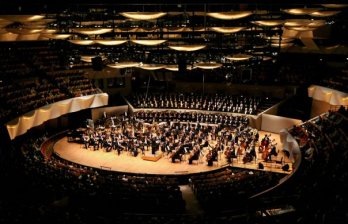 Closer to home, Colorado Public Radio reports that the Colorado Symphony has found a creative way to cover some of their overhead costs: paying the rent for Denver’s Boettcher Concert Hall in part with tickets that the city’s arts agency, Denver Arts and Ventures, can distribute to people who would otherwise not be able to attend symphony performances.

On the basis of CPR’s story, this appears to be a classic win-win. The orchestra saves on their costs, they likely don’t lose any ticket sales, and the city has the opportunity to increase the reach of one of its flagship cultural institutions.

This is a promising idea. We should all watch how it plays out for both the orchestra—which faces a new challenge in 2015 when Boettcher Hall is closed for renovations—and the City of Denver.

UPDATE: Read this story by Ray Mark Rinaldi in the Denver Post on the future of the Denver Perfroming Arts Complex and  Boettcher Concert Hall.

Apart form these two organizations, the question remains just how much of a crisis classical music faces in 2014. First some perspective on the question. As long as I have been working in classical music, there has been talk about crisis. The audiences have been getting older for so long that, Lazarus-like, the thread of their lives must have been retied by someone.

Nevertheless, there can be little doubt that audiences have been shrinking for some time—shrinking more in some places, less in others, and in a few happy outliers, growing. (The figures graphed by Greg Sandow are particularly illuminating.)

The shrinkage has reached the point that directors of classical music institutions are talking openly about it—whether it’s Peter Gelb saying the Metropolitan Opera is facing bankruptcy, or Central City Opera’s Pat Pearce seeking ways to find new audiences, or Andrew Bradford, the new executive director of the Colorado Music Festival, saying “I don’t buy at all this argument that . . . classical music is dying.” 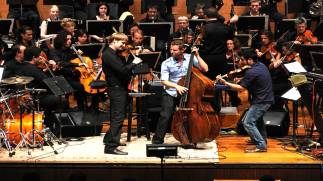 The critical word here is institutions. Young musicians are finding exciting and creative ways to reach audiences. Of the many examples I could cite, look at Time for Three: This young alternative trio of classically-trained musicians who mix anything and everything into their repertoire without compromising their standards has been very successful in Boulder and around the world.

Or Steve Hackman, the director of CMF’s “Musical Mash-up” series, who combined his conservatory training with a love of popular music to build a whole career around various ways of crossing musical boundaries. (Or in a similar vein, think of the many composers who have successfully incorporated popular idioms into their work, including George Gershwin and Leonard Bernstein in earlier times, or Michael Daugherty and David Lang today.)

But the large institutions—symphony orchestras, opera companies, music festivals—with their extensive costs for personnel, facilities, and logistical support, are struggling to maintain their financial viability. Part of the problem is that most of those institutions do only one thing well: present performances of a very specific repertoire. That one thing is what their founders wanted, so that’s what they were meant to do. But now that we are in more eclectic times, with all of us sampling from a wider pool of entertainment choices, musical styles and cultural trends, the large institutions can come across as Johnny One-Notes, and that is no longer enough.

We know that large institutions are rarely nimble. And nimbleness is required to respond to changing times. Obviously, individual artists and small, self-contained groups, can be more nimble. That is why Time for Three and Steve Hackman and Michael Daugherty can more easily build their own individual careers.

What all of these success stories have in common is the blurring of the line between classical and pop styles. I have written about this before, and it is the whole basis of CMF’s popular “Musical Mash-up” concerts.

If the one mashup performance I have attended at CMF is any indication, it is a very successful venture for the festival and may be a harbinger of things to come. I was impressed by three things: Chautauqua Auditorium was sold out; the audience included all ages, with people that looked like the typical symphony audience alongside much younger listeners; and the audience had an almost rock-concert vibe, with cheering and applause throughout.

Apart from the artistic validity of the mashup enterprise, that was an audience that any orchestra would love to have. So much so that at some point, artistic validity becomes, not irrelevant, but something that has to be addressed within the mashup genre, not from outside of it.

I believe that point has now been reached: the mashup (or crossover, or whatever you want to call it) horse is out of the barn, and it’s not going back. CMF is not alone in this enterprise—look at the program of symphonies around the country, playing film music, sometimes live with films, bringing in pop artists, commissioning new works that cross boundaries.

Like it or not, mashups of one form or another will be part of the future of our musical life. And not only for orchestras and festivals: opera has embraced a similar aesthetic by presenting Broadway musicals. The use of popular idioms in opera is as old as Porgy and Bess and as new as Jake Heggie’s Dead Man Walking presented this summer at Central City. (And that is overlooking the fact that for most of its life, opera was a popular idiom!)

The more you consider these trends, the more you realize that any decision made by our classical music institutions—programming, hiring, choice of soloists, venues, the pricing of tickets, outreach programs, and so forth—is, or should be, made with eyes on the future. If the directors of those institutions are thinking that way, shouldn’t we, the audience, think that way, too? After all, they are asking for our financial support, not the other way around.

To explore the subject a little further, here are two excellent articles by Sandow again: “Pop Fiction” and “Why Classical Music Needs Rock & Roll.” I think both are important reading for anyone thinking about the future of classical music.