“The one thing you cannot do is stand still”

The general/artistic director of the Central City Opera is facing the same problems as every opera company in the country: falling revenues and shrinking audiences. Tied to both the recession and to changing demographics, these are the twin elephants in the opera house—and for that matter, the concert hall, the theater and the museum gallery—throughout the country.

Fortunately, the problems have not been as drastic for CCO as the recent and well publicized troubles at Opera Colorado, the San Diego Opera, and even the staid Metropolitan Opera in New York. (I wrote about those companies in an earlier post on this blog.)

“Everyone has been affected by what’s been happening,” Pearce says. “Some people were better able to navigate it, but everyone is looking to do things differently.”

Pearce believes that it’s not enough to bring in new audiences, if you don’t also find new sources of income. And the other way around: income is not enough if you are not finding the audiences for the future of opera. 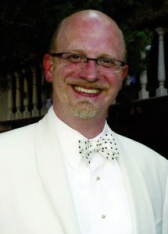 “The smartest people will do both—raise more money and get new audiences,” he says. “Nobody has figured it out yet. (But) the one thing you cannot do is stand still.”

With that in mind, Pearce and CCO have charted a new course for their 2015 season. As Pearce explained in the press release announcing the coming season, “We are adjusting our strategy . . . to create a deeper connection with our current and future audiences.”

To help connect with new audiences, CCO will take three one-act chamber operas on the road next year, visiting communities around Colorado with full productions featuring casts of professional and apprentice artists and orchestra (if called for). The three touring operas will represent an intriguing mix of styles and periods: The Prodigal Son, a church parable by Benjamin Britten; The Blind, an unusual a capella concept opera by Lera Auerbach; and Don Quixote and the Duchess (Don Quichotte chez la Duchesse) by the French Baroque composer Joseph Bodin de Boismortier. (See descriptions of these unusual works below.)

Locations and dates of these performances will be announced soon. In the meantime, Pearce estimates that there will be a total of 9–12 performances of the three in churches and other venues around the state. Each production will also have a performance in Central City during the summer season.

These traveling productions will compliment two productions to be performed in repertory in the beautiful Central City Opera House. Continuing a recent trend at Central City and other opera companies around the world, one will be a Broadway musical—Man of La Mancha—and one will be from the traditional grand opera repertoire—Verdi’s La Traviata.

For the past three years plus the current season, CCO has taken a production down the mountains and into Denver as a means of seeking out new audiences. Three of those years, the Denver performance has been a Broadway musical.

“We’ve been in experimentation for three or four years, some of which worked and some of which didn’t” Pearce says. “The reason we did the (Broadway) musical theater pieces in Denver was to see if we could find a new audience.” 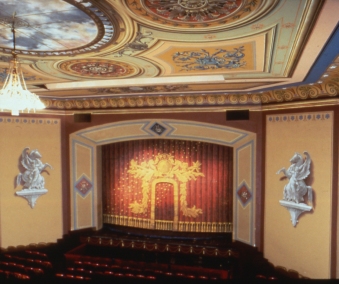 In fact, those performances did bring in new audiences, as planned, but attendance remained more or less level, meaning that about the same number of people who were regulars in Central City did not make the trip to Denver. It was that outcome that led to intensive strategic planning over the past year and the development of CCO’s new format. Pearce said that every possibility was considered, including selling the company’s Central City property and moving their headquarters to Denver.

Fortunately, that scenario was quickly rejected as the CCO administration recognized how much their success is tied to their unique location in a Colorado mining town, and their historic jewel-box opera house. “Partly what people pay for is the experience here (in Central City),” Pearce says, looking around at the audience gathering on the opera house grounds.

“Part of our brand is this experience.”

For those unfamiliar with the one-act operas on CCO’s 2015 season schedule, the company has provided the following descriptions:

One of Benjamin Britten’s three church parable operas, which also include Curlew River and The Burning Fiery Furnace, The Prodigal Son is based on the Biblical story of the same name. With a libretto by William Plomer and a score dedicated to Shostakovich, this one-act opera centers on the well-known parable about a son, bored with life on his father’s farm, who asks for his inheritance to go seek an exciting life in a far-off city where he is deprived of his fortune and left penniless. When the son returns home to ask for forgiveness, his father receives him with open arms, but his angry older brother who has loyally worked his father’s fields doesn’t feel the same. The Prodigal Son will be performed in English at church venues in Central City and throughout the state.

“It’s not the characters who are blind,” said composer Lera Auerbach in a New York Times interview about the one-act opera The Blind. “The message is that we are the blind. With all our means of communication we see each other less and connect to each other less. We have less understanding and compassion for other people…” First performed in October 2011, this unconventional a capella opera for 12 singers requires that audience members be blindfolded so they can enter the world of its sightless characters. Adapted from an 1890 play by Maurice Maeterlinck, the story is about a dozen blind people who are taken by their priest on an outing. When the elderly priest suddenly dies, they are stranded on an island left helpless and scared. The group realizes that they never really knew the priest as a person as they stumble upon his cold, dead body. A Russian- American composer, Lera Auerbach wrote The Blind in 1994 while she was a student at Colorado’s Aspen Music Festival. Central City Opera’s production is in partnership with American Opera Projects, the company who presented the opera for the 2013 Lincoln Center Festival in a production touted by the New York Times as “An adventurous, eerie and thoroughly engaging example of immersive theater.” The Blind will be performed in English at non-traditional venues in Central City and across the region.

As its final traveling one-act production for 2015, Central City Opera presents Don Quixote and the Duchess (Don Quichotte chez la Duchesse), by French baroque composer Joseph Bodin de Boismortier. This piece is adapted from Cervantes’ novel Don Quixote with a libretto by Charles Simon Favart. First performed in Paris in 1743, the opera is based on one episode in the novel. The story follows a Duke and Duchess who amuse themselves by creating an elaborate ruse to fool the title character. The story is rich with incisive, quick and ironic turns. A rarely performed piece, this production will be the regional premiere of the opera and will provide a completely different take on the same story of Don Quixote presented as part of Central City Opera’s production of the musical Man of La Mancha also being presented in 2015. Don Quixote and the Duchess will be performed in English in both Central City venues and across Colorado.

THE PRODIGAL SON by Benjamin Britten

THE BLIND by Lera Auerbach

DON QUIXOTE AND THE DUCHESS by Joseph Bodin de Boismortier