Maria Luigi Carlo Zenobio Salvatore Cherubini just may be the most influential classical composer you have never heard of. 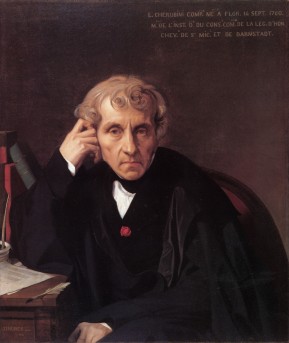 As director of the Paris Conservatoire for 20 years (1822-42) and author of an important textbook on counterpoint, he influenced a generation of younger musicians. His many operas and his church works were widely performed and admired in his lifetime.

“It’s a beautiful, beautiful piece,” says Vicki Burrichter, director of the Boulder Chamber Choir who is preparing the chorus for the performance. “Cherubini’s really extraordinary and was admired by Beethoven and Schumann and Brahms. I think he should be performed a lot more often.”

Bahman Saless, the conductor of the Boulder Chamber Orchestra who will lead the performance, agrees. He writes by email from Prague, where he is traveling as a conductor, “What I would like our audience to take away from this concert is that there were many contemporaries of Beethoven and Mozart who were overshadowed by the presence of these titans. Some of them deserve some light to shine on them.”

The next concert by the Longmont Symphony Orchestra (7:30 p.m. Saturday at Vance Brand Civic Auditorium) is steeped in the idea of destiny.

The concert is titled “The Force of Destiny,” a title taken from the opening Overture to La Forza del destino by Verdi, but the idea of “destiny” goes much farther than that. “I believe that in this program there’s a thread of destiny,” Elliot Moore, the LSO’s conductor, says.

In fact, Moore finds a sense of destiny everywhere he looks: in the pieces he has selected for the program, in the violin that his soloist Andrew Sords will play, in the instruments in the orchestra, in the inclusion of the Longmont Youth Symphony in the performance of one piece on the program, and even in the future of the arts in Longmont.

“In Longmont, we’re living into this possibility of the arts being a real economic driver, and putting the arts on the map here” he says. “It’s something that’s going on. So I find that the music, our soloist, all of these things are all coming together—I believe it’s our destiny.”

Sords, who will play the Chaconne with the LSO, says that Corigliano’s score for the film is “one of the genius pieces of the last 23 years. It’s cinematic even without a movie to go with it.”

Sords’ own violin does not quite have the romance and mystique of the fictional “Red Violin,” but it inspires Sords to think about its history. “I think about my own violin, which is only 100 years old: who played on it before me, where did it go? The movie [has] those Hollywood elements, but it really does make you think about these instruments, who played on them, what blood, sweat and tears went into them.”

“That was one of the things that I wanted to do with this program,” Moore says. “Each one of the instruments [in the LSO] has a story. It has some kind of destiny. If it’s to inspire our community or to make its way into the hands of a child, it can change their life. I want to underscore how instruments have life, and they can impact the world.”

Sords will also play La Campanella (The little bell), a movement from Paganini’s Violin Concerto No. 2. Paganini was the greatest violin virtuoso of his time. A great showman, he was known for playing things that others considered impossible. As a result, he was rumored to be in league with the devil—which is the connection that Moore sees to the idea of destiny. 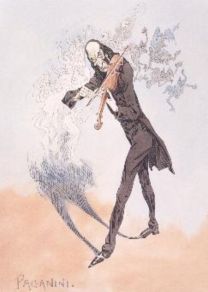 “Paganini was thought of as this devilish character who could do insane feats on the violin,” he says. “To me, that’s how it goes together with The Red Violin, as well as with the rest of the program—this sort of unbelievable ability to do the impossible.”

La Campanella is the last movement of the concerto, written to end the piece with a flourish of virtuoso pyrotechnics. The piece proved to be so catchy that another great virtuoso, Franz Liszt, wrote a brilliant etude based on Paganini’s theme. “If he were alive today, Paganini would probably be writing for Lady Gaga,” Sords says.

But is the movement that difficult for today’s violinists? “I think everything’s difficult,” Sords says. “Intellectually it’s not as hard as others, but you still have to have that little bit of thought and pizzazz and architecture to it in order to pull it off.”

The final work on the concert will be The Pines of Rome by Respighi, one of the great orchestral showpieces, from the eerie depiction of catacombs to the inexorable advance of Roman legions in the finale, “The Pines of the Appian Way.” In addition to the offstage brass that give an extra impact to the finale, The Pines of Rome is also notable as the first piece to combine live performance with an electronic effect: a recording of a nightingale in the peaceful “Pines of the Janiculum.” 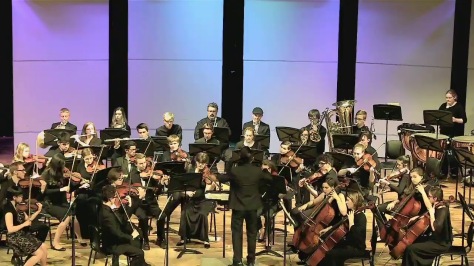 For this performance, members of the LSO will sit side-by-side with the Longmont Youth Symphony. “Tying us back into the theme of destiny, I think about what this experience may give these young people who are so passionate about music,” Moore says, “where this may lead them down the road—whether they be the future musicians of the Longmont Symphony or any symphony across the United States.

“Including youth in this program is so important to what the Longmont Symphony’s committed to: fostering a love of music for every single person in our community.”

“The Force of Destiny”

Verdi: Overture to La forza del destino (The force of destiny)
John Corigliano: The Red Violin: Chaconne for violin and orchestra
Paganini: La Campanella (The little bell) from Violin Concerto No. 2
Respighi: The Pines of Rome (side-by-side with the Longmont Youth Symphony)