Their concert featuring those composers, titled “Diverse Voices,” will be Saturday in Denver and Sunday in Boulder (Feb 1 and 2). The three living composers are Jessie Montgomery, a New York violinist and composer who has been affiliated with the Sphinx Organization, which supports young African-American and Latinx string players; Rudy Perrault, a Haitian native who is director of orchestras at the University of Minnesota, Duluth; and Gabriela Lena Frank, a California-born composer who has mixed Peruvian, Chinese, and Lithuanian-Jewish heritage. 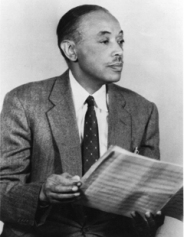 William Grant Still, the fourth composer on the program, was associated with the Harlem Renaissance in the 1920s, and later had a successful career arranging popular music as well as music for television and films. His Symphony No. 1 (“African-American Symphony”) was the first symphony by an African-American composer to be performed by a major orchestra.

On the all-string orchestra program, Pro Musica will perform his Danzas de Panama, Montgomery’s Starburst, Perrault’s Exodus and Frank’s Leyendas: An Andean Walkabout. This program reflects Katsarelis’s personal commitment to diversity, meaning not only composers of color, which describes all four composer on the program, but also female as well as male composers (two of the four), and new music as well as recognized classics (three of the four).

“I think we come to a more healthy place if we’re inclusive of the different talent and the different voices that we have in the 21st century,” Katsarelis says. “Pro Musica has a mission of [performing] classic to cutting edge [music], and we also present works that were under-represented.”

Katsarelis includes new works among the “under-represented.” “Where the classics touch something universal in us, new music speaks to right now,” she says. “It may or may not last, but it has something to say to us today.”

The entire program is for string orchestra, which is where Katsarelis had to do some searching. “When I encounter a musician that I really respect and am really intrigued by, I go on a Sherlock Holmes-like hunt for music that is appropriate for Pro Musica Colorado Chamber Orchestra,” she says. 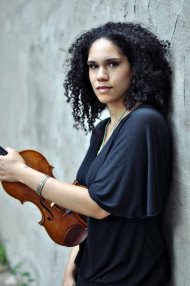 Needing music for strings alone, she found several pieces that are written for string quartet or string orchestra. The one exception is the opening work on the program, Montgomery’s Starburst, which was written for the Sphinx Virtuosi chamber orchestra. “It’s a great piece, really energetic, as you would expect a starburst to be,” Katsarelis says.

“It’s inspired by a cosmic phenomenon, and for her that involves rapidly changing musical colors. It’s only a three-minute piece, but you’re getting all these different colors that a string orchestra can produce. They’re playing on the bridge to get this eerie sound, they play harmonics, they have various kinds of pizzicato, and [Montgomery] combines them in various ways. It’s a musical burst as well as a starburst.”

Katsarelis met Perrault through her own work in Haiti. Since 2004 she has gone to Haiti every summer to teach at a music camp, and sometimes during the year as well. “It’s a very musical culture, and they’re always hungry for more,” she says. “It’s really rewarding to work there.”

Perrault’s Exodus was originally part of a piece for string quartet. It was inspired by and dedicated to people who have been forced to leave their homelands as refugees. “I hear a very strong musical personality,” Katsarelis says of the score.

“He knows what he’s doing, and he knows how to use a wide range of musical language for the wrenching emotion that is part of the piece. I hear little hints of Bernstein and Shostakovich with a little bit of an island rhythm.”

Frank’s mixed heritage plays a very large role in her work. “Her mother was Peruvian-Japanese, and her father was Lithuanian Jewish,” Katsarelis explains. “She became a kind of musical anthropologist and explored her roots, and she was really captivated by Peru and the Andean music, the Andean instruments and genres and character—they’re all reflected in her piece.”

For example, she imitates the sound of Andean instruments—the panpipes, a heavy wooden flute called the tarka, guitars—in her writing for strings. Other movements depict the chaqui, a legendary runner who covered large distance to deliver messages from town to town, and the llorona, a professional crier hired to mourn at funerals.

Katsarelis often describes pieces of music as a journey, with a return to home providing closure. But in this case, she says, “Peru is part of Frank’s background, and in her exploration she finds another version of home. So we have a journey; home is just a little bit different.”

Thinking of her musical mission  beyond the individual pieces she selected to illustrate diversity, Katsarelis says “I always thought that classical music could help bring world peace, so this is just one more step.” In addition to that lofty goal, she adds, “What I’m presenting is terrific music. It’s beautiful, it’s inspiring, it’s entertaining, it’s thought provoking and it engages the world today.

“I hope young people will come to the concert, because it’s part of what they’re growing into: a world that’s just so global, and so diverse.”