Based on a novella by Herman Melville, it takes place on a British man-of-war in 1797, during England’s war with France. The cast is large, all male: officers, sailors, marines, midshipmen, powder monkeys. That often leads to a very large set, such as the massive 1978 Metropolitan Opera production—still in use—that revealed multiple levels and decks of the MHS Indomitable, shifted up and down by theatrical elevators. 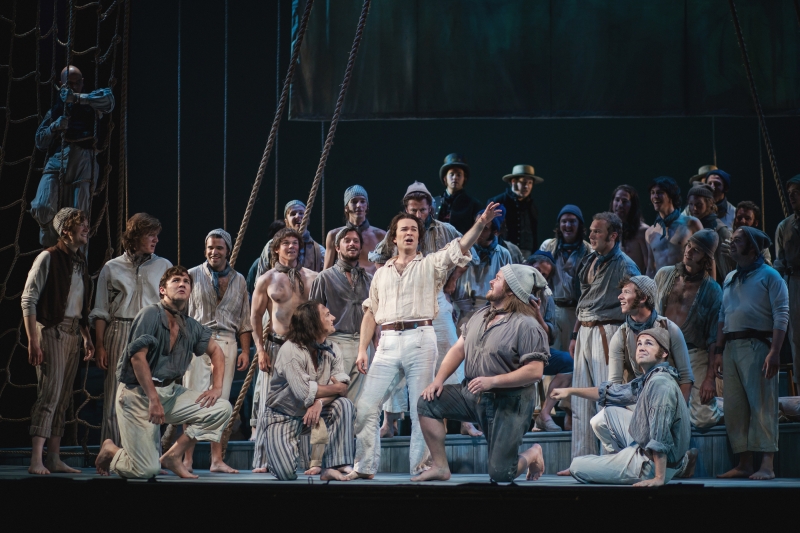 It was all the more surprising then, when Central City Opera announced the Colorado premiere of Billy Budd in their intimate opera house. The production, now running at CCO though Aug. 2, reflects general/artistic director Pelham Pearce’s devotion to Britten’s operas.

Billy Budd offers perhaps the stiffest challenge of all of Britten’s operas for the company to mount on its small stage. The result is an emotionally powerful production, but one that has traded grandeur for a more intimate impact.

The scenic design by Takeshi Kata and David Martin Jacques is attractive, evoking a sailing ship from only ropes and tilted pieces of deck, and worked efficiently for all but the largest choral scenes. Projections by Sean Cawelti displayed on screens that doubled as ship’s sails were effective in enlarging the scope of the stage, and crisscrossing ropes became symbols of the naval regulations that confine everyone on board the ship.

There are many scenes of distinct intimacy: the prologue and postlude by Edward Fairfax Vere, captain of the Indomitable; Vere with his fellow officers in his cabin; Budd with other sailors below decks; Budd with Vere and his subsequent trial; Budd in prison before his execution. In fact, the most important moments of the opera are moments of intimacy, and with the audience so close to the actors every glance and gesture had impact.

A notable aspect of the production was how powerfully it communicated the casual cruelty of an 18th-century naval ship. The flogging of a young novice sailor hit hardest, but there were many moments of routine brutality by officers toward the sailors, effectively revealing the crew’s suppressed emotions.

On the other side of the ledger, the small theater limits the range of musical dynamics and impact. Even moderately loud choral and orchestral sounds are felt viscerally in the tiny house, making distinctions among musical climaxes difficult; they’re all loud. Nonetheless, the big choral scene “This is our Moment,” when the Indomitable is chasing a French ship and the full cast comes onstage, is undeniably exciting.

Full cast of Billy Budd singing “This is our Moment.” Photo by Amanda Tipton.

Negatively, it was so crowded that it was difficult to take in all the different parts of the crew. It was impossible to separate officers from men, for example, or to show the place onboard of the young midshipmen and the powder monkeys who bring powder to the guns. That scene turned the crew into a single mass, obscuring hierarchical nuances. 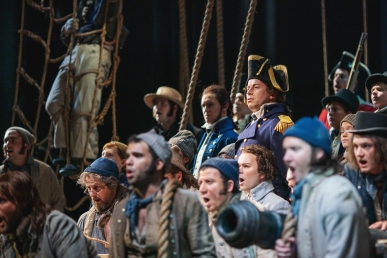 In spite of the opera’s title, performances of Billy Budd depend most on the ambivalent character of Vere. Sympathetic to Billy, whom he knows to have been falsely accused, he is unable to free himself from routine and regulation in order to save him—a fact that haunts him to the end.

Daniel Norman brought a light, flexible, floating tenor to the part, capable of handling the meandering vocal lines eloquently. His transformation from old man (Prologue) to virile commander and back again (Postlude) was effective, in both staging and Norman’s physical appearance. His singing throughout was effective, with especially clear diction.

Joshua Hopkins was everything Budd needs to be: attractive, innocent, naive. In fact, he was so appropriately a blank slate that he registered less than other more strongly marked personalities in the cast. He portrayed Billy’s relationships with fellow sailors well. His singing was always direct and expressive. His ballad, “Billy in the Darbies”—with a text by Melville—was simple and heartfelt, if not quite beautiful.

The other major character, master-at-arms John Claggart, is one of the great villains of opera. He even has a solo number to rival Iago’s famous “Credo” from Verdi’s Othello, singing “O beauty, o handsomeness, goodness . . . I will destroy you.”

Kevin Burdette seemed to relish this juicy role—and the boos that came with his curtain call. His voice took on a menacing edge, well conveying Claggart’s evil, but unremittingly so. He was effective in showing Claggart’s fundamental malignity, but the portrayal was one-dimensional. There was never the smooth, seductive sound that would have mitigated the vocal harshness and lent more depth to his cunning.

The many smaller roles surrounding these main characters were all ably handled by the cast. As Vere’s fellow offices Mr. Redburn and Mr. Flint, Dennis Jesse and Federico De Michelis were vocally solid and appropriately reserved and aloof. They brought a welcome moment of humor to their duet “Don’t like the French.”

Joseph Gaines was a tellingly whiny Squeak and Jonas Hacker suffered convincingly in the unhappy role of the Novice. Benjamin Werley (Red Whiskers), Jonathan Hayes (Donald), Sean Stanton (Bosun) and Brian Kontes (Lt. Ratcliffe) were all fine in their smaller roles. Matthew Burns brought warmth and sympathy as Billy’s truest friend, Dansker. Ethan Conklin made a good impression as the cabin boy, and the Midshipmen and Powder Monkeys were valuable to the success of the production.

Stage director Ken Cazan made creative use of the small stage, using levels and spaces to delineate differences of rank. There was never any doubt where every character stood in the moral hierarchy that lies at the heart of the story.

One negative note, for me: Vere’s apparent heart attack as he was singing his final words struck me as melodramatic and grotesque. It would be better to let the words speak of the approaching end without unnecessarily pounding the point home.

Conductor John Baril, who is CCO’s music director, led the excellent orchestra with great sensitivity. He maintained a careful balance between pit and stage—with help from Britten’s expert orchestration—and kept the opera moving resolutely to its tragic end. He moved more resolutely than most through the sequence of 32 chords that represents Vere’s private conversation with Billy after his trial, a choice possibly shaped by the unusual staging that left Vere onstage throughout.

A special word must be said for the orchestra, who handled Britten’s score beautifully. Although Billy Budd calls for large orchestra, and it was heard with great force when needed, much of the scoring is delicate. There are many wind solos, by saxophone, by flute, by clarinet, by bassoon, and all were wonderfully played.

One final note about the summer’s pair of mainstage productions: Madama Butterfly and Billy Budd are both stories of innocence betrayed. It is fascinating to see this common theme explored in such different musical styles and contexts. This may be just a happy coincidence, but seeing both in one summer deepens the experience of each opera.

Billy Budd continues through Aug. 2 with both evening performances and matinees. Anyone who loves Britten or cares about opera should take the drive up to Central City to hear this relative rarity live.

Full cast, credits and tickets at the CCO Web page.