The scene and costume design by Dany Lyne were first used in 2005, in a production directed by the soprano Catherine Malfitano. She has sung the role of Butterfly, and she appeared in her first operatic role at the CCO in 1972 so it was natural for her to return to Central City 33 years later for her directorial debut. The physical production was used again in 2010, and for this year’s production directed by Alison Moritz. 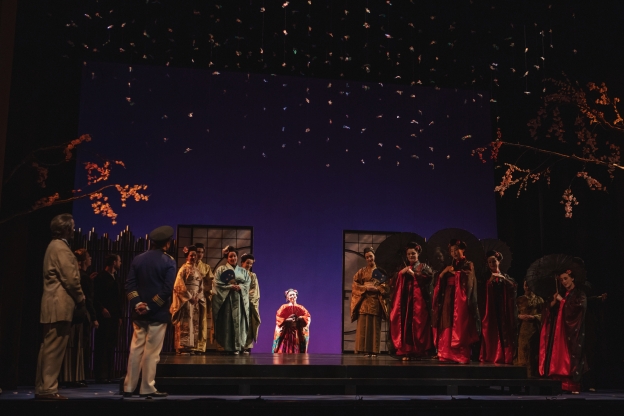 The scenery is minimal but lovely, and the open design allows for considerable flexibility in representing different spaces in Butterfly’s house, where all action takes place. The costumes are effective and appropriate throughout; those for Butterfly’s family in the first act are strikingly colorful, standing out beautifully against the set. Moritz made creative use of the limited space available on the Central City stage, giving the audience an effective and deeply moving interpretation.

As Butterfly, Raquel González shone within a generally strong cast. Her beautiful voice was used to good effect for both musical and dramatic expression. To mention but a few details: she started softly and hesitantly, befitting a 15-year-old girl who has been sold into marriage. But once she and Pinkerton were alone, both her singing and Moritz’s sensitive direction revealed her growing passion.

Her strength and volume grew throughout the long love duet, symbolizing her growing confidence, swelling to her greatest volume on the very last note of the act. In the second act, her voice was aglow when she thought Pinkerton was returning, then lost all warmth and color when she realized that he was not coming back.

One final note: her death scene is hard to get right, but her hesitation when she heard Pinkerton’s voice, her resolve to go ahead with suicide, the staging of her ritual death were terribly realistic, avoiding the empty clichés that too many productions resort to. This amplifies the impact of the ending, which was reserved, tellingly, for just Pinkerton and Butterfly.

Cody Austin’s Pinkerton was strong, direct, and touched with the swagger of a feckless young naval officer. His voice was powerful and well heard throughout, with a bright tenor sound that developed a harsher edge when pushed at the top. The thoughtless Pinkerton is not an ingratiating role, but Austin managed to make him both attractive enough in his casual manner to be a believable lover, and callous enough to heighten the pitch of Butterfly’s tragedy. This is a difficult and crucial line to observe, and both Moritz as director and Austin as actor/singer found a good balance.

Troy Cook was a forthright, steady presence, vocally and dramatically, as the American consul Sharpless. His part contains no vocal fireworks, since he suffers none of the violent passions, but his solid baritone was comfortingly smooth throughout. The conscience of the opera, he came across as sympathetic, frustrated, then angry with Pinkerton, in this respect standing in for the audience.

Suzuki is an absolutely vital role that is too easy to take for granted. Annie Rosen was exemplary as Butterfly’s servant, her warm sound as comforting and reliable as Suzuki’s love and support for her mistress. In the context of Butterfly’s Japanese environment, she is the understanding common woman who observes Butterfly’s unwavering love for an American with sympathy and apprehension. She was in fact the ideal comprimario, as roles are called that are identified as being “with the primary” characters—musically supportive, solid as a duet partner, never outshining the star.

Joseph Gaines was just obsequious and servile enough as Goro the marriage broker. He sang clearly, with just a touch of the oily flatterer in his sound. Brian Kontes made a very strong impression as the Bonze. His denunciation of Butterfly’s conversion to Christianity was imperious, vocally the curse of a religious tyrant. Thaddeus Ennen sang well in the thankless role of Prince Yamadori, and Christina Pezzarossi was effective in the even more thankless role of Kate Pinkerton.

I should devote a few words to Isla Burdette, the child who played “Trouble,” Butterfly’s son. She had more to do than is often the case, and she carried it off like a pro—perhaps reflecting the fact that her father, Kevin Burdette, is an opera singer? (He will be heard later in the CCO production of Britten’s Billy Budd.) I cannot resist the emotional tug of children on stage, and she is one of the best I have seen.

Conductor Adam Turner had all of the flexibility, the push and pull of tempos and emotional turns of Puccini’s score well in hand. The orchestra played with sensitivity and great expression, especially in the tender moments of the score. The humming chorus and orchestra interlude in Act II were especially beautiful. 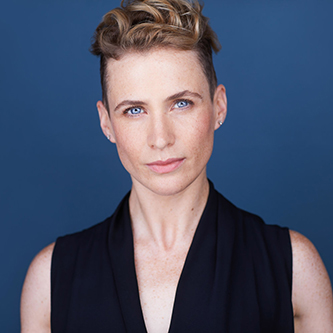 But it is the stage direction and deeply human, emotive performances that carried the night. There were many small touches that brought the characters to life—the photographer who records the marriage party, so that Butterfly later has a framed photo on hand; the costumes that showed the westernization of Japan in the early years of the 20thcentury, thus highlighting the cultural clash that underlies the story.

For me, the most telling detail was Butterfly’s mother, clinging tearfully to her daughter when the family abandons her after the Bonze’s denunciation. This wrenching moment makes clear the totality of Butterfly’s isolation when Pinkerton leaves Japan. In comments before the performance, Moritz said that she wanted to make Madama Butterfly “a story about a family.” In this and other moments she succeeded, devastatingly.

Madama Butterfly continues at Central City Opera through Aug. 4 (see dates below). Tickets are available through the CCO Web page.

Revised 7.10.19 to include production photos, courtesy of Central City Opera.