Sometimes his career “just happened,” but he’s been lucky

Bass Kevin Langan, Sarastro in this summer’s remarkable production of Mozart’s Magic Flute at Central City Opera, brings a little bit of experience to the role.

Kevin Langan is performing in his 20th production as Sarastro, at Central City Opera

It is his 20th Sarastro over a 40-year career, starting with a performance at the Indiana University Opera Theater when he was a student.

That was a particularly remarkable production, since among the cast were singers who went on to performances at the Metropolitan Opera, the Glyndebourne Festival, the Chicago Lyric Opera, the Santa Fe Opera, the Houston Grand Opera, La Scala, the Salzburg Festival, the Bavarian State Opera, and other major opera houses. Many are conservatory or university faculty today. (I resist the temptation to name some for fear I will forget others, and they all have had serious careers.) 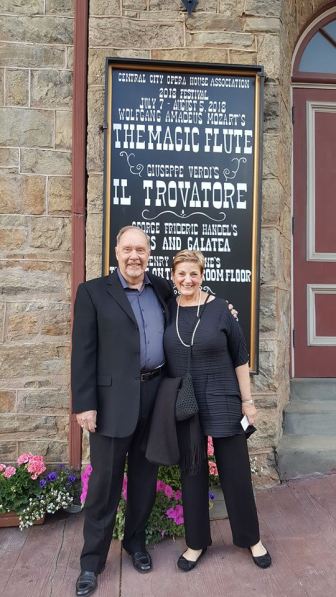 One I can name: soprano Sally Wolf, who sang the Queen of the Night in 1977 and married Langan a few years later. Both Langan and Wolf have performed at CCO over the years, although only Langan is cast this summer. They just celebrated their 35th wedding anniversary while in Central City.

I knew Langan and Wolf when we were all graduate students at Indiana U., and I attended that performance in 1977. I don’t remember it in detail, having heard many Flutes since then, but Langan does. After hearing the performance in Central City last week, I sat down with Langan and asked him to reflect back on his 40 years of singing Sarastro, and talk about his interpretation of the role. Interestingly, he says it has not changed much since 1977.

“When I first saw Magic Flute (it was) at the Metropolitan Opera around 1977, right before we did it at IU, because I wanted to get an idea of what it was like,” he says. “The German basses who used to do it at the Met were usually big voices that sang loud, and I thought that’s the way you’re supposed to do Sarastro. Over the years as I did it and worked on it, I decided no, Sarastro should be sung like an (art song) singer would sing it, like you were going to sing Schubert or Schumann.”

Langan names one singer as a model for his approach. “I never saw him live, but I liked the way he sounded on records, and that’s Ludwig Weber,” he said. Weber was an Austrian bass who sang leading roles in Europe from the 1930s, including roles at the Royal Opera Covent Garden during the Second World War and the Vienna State Opera in the 1950s. (You can hear Weber here.)

“The music is not bombastic. That’s the way Mozart wrote it. I don’t think he writes fortissimo once for Sarastro, barely even forte. The more times I did it, I would go to conductors and say ’I don’t want to just go up there and hammer it out, I want to do it like a song.’ And the conductor this time around [André de Ridder] said, ‘Perfect. That’s exactly how I want to do it.’”

Like the Queen of the Night, Sarastro’s part consists largely of two major arias: O Isis und Osiris, sung to the priests of his temple, and In diesen heil’gen Hallen, sung to Pamina. “They’re lessons,” Langan explains. “The first one is a lesson about the gods, and In diesen heil’gen Hallen is a lesson to Pamina, who’s been just devastated by her mother (who asked her to kill Sarastro and rejected her when she refused). It shouldn’t be (sung) out to the audience, it should be to her, and the audience is privy to these two people talking.

“That’s my approach to the role, no matter what production values you give it. I don’t want to make him a blowhard—I want him to be friendly. And that’s the way I sang it at Indiana.” 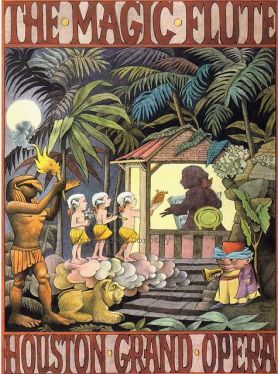 Langan has been thinking back about his career, partly for a potential memoir of his years in opera. He has sung with many of the greats of the operatic stage over the years, including Leontyne Price, Luciano Pavarotti, Joan Sutherland and Cesare Siepi, to name a few, so he has a lot of memories to draw upon. And of all the Magic Flutes he has sung, two stand out. Interestingly, he remembers them more for their production designs than their musical interpretations.

One was designed by children’s author Maurice Sendak, created originally for the Houston Grand Opera and later performed by other companies around the country, including Opera Colorado in 1999. That one was like performing inside a story book, Langan said.

He and Wolf both performed in a production designed by the English painter David Hockney. Originally created for the Glyndebourne Festival Opera in 1978, that one also toured around the country. Langan and Wolf sang in the Hockney production in San Francisco in 1991, and a DVD of the production from the Metropolitan Opera was released in 2000.

Those are not the only productions he remembers, though. Another favorite was a production designed by Zandra Rhodes, a clothing designer from the “Swinging ‘60s” in London. “I looked like Don King with orange hair,” Langan recalls. “I had a bright orange outfit, and she herself always had purple hair. We had a lot of fun with that show, but it was more about the visuals. 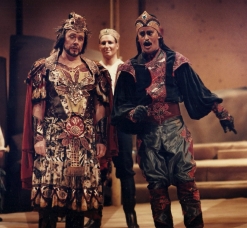 “I played Sarastro as an Indian chief in Calgary. We were all a tribe of Indians and I was their chief. That was fun. And there was Zack Brown’s production that we did in Washington, where I was in a white gown, bald, very elegant. That was cool—I almost look like I’m out of Star Wars!”

Looking back, Langan feels lucky, because he was never asked to do Sarastro in a production that was too crazy. “I don’t think I ever did one that was really ridiculous. I’ve done some pretty whacked-out shows, but not Flute. I was pretty lucky.”

And that’s the last point that Langan wants to make, especially for young singers: His career may look like it was all well planned, going from one Sarastro to another, singing other great bass roles including Osmin in Abduction from the Seraglio, Timur in Turandot, King of Egypt in Aida and The Grand Inquisitor in Don Carlos. You might think that’s just the way he planned it, but that’s not really the case. Some of it was luck.

“I had a lot of things happen to me that were unusual for a young singer,” he says. “Going to San Francisco so young, and working with all these great singers. (But) I had no idea what was going to happen next. It was an odyssey. Things just happened. And that’s one thing about a career, you have no control over it. It takes you on a trip.”

As a lifelong fan of the Beatles, whom he credits for his first interest in singing, Langan can’t resist one more comment. “I say John Lennon’s line, ‘Life is what happens to you while you’re busy making other plans.’ That is so true.”

Langan will continure in the role of Sarastro at Central City Opera through Aug. 5. Tickets are available here.