Peter Oundjian, the current artistic advisor of the Colorado Music Festival, last night (July 12) made his first appearance leading the Festival Orchestra. He had selected a stunning program and delivered a vivid and riveting performance.

Oundjian and the orchestra opened with a brash, zesty performance of Leonard Bernstein’s well known Overture to Candide. This bustling overture won the audience from the first notes, as it always does, getting the concert started on a bright note.

Next on the program, Oundjian brought on a friend from his student days at Juilliard, the widely esteemed Soviet-born Israeli-American pianist Yefim Bronfman, for a performance of Brahms’ First Piano Concerto in D minor. Oundjian explained the esoteric relationship to the Bernstein Overture: That Bernstein had given a speech before a notorious 1962 performance of the same concerto with pianist Glenn Gould, disavowing Gould’s interpretation while endorsing his right as a performer.

He reassured the audience, however, that he and Bronfman would not duplicate the conflict between Bernstein and Gould.

After Bernstein, the orchestra produced a noticeably darker sound for Brahms. From the very beginning, Oundjian established the contrast between the power of Brahms’ opening phrase and the lyrical sections that followed. In particular, he showed an ability to spin out melodies over a long musical span, a skill that Bronfman duplicated in his playing. Oundjian’s support for the soloist was exemplary. 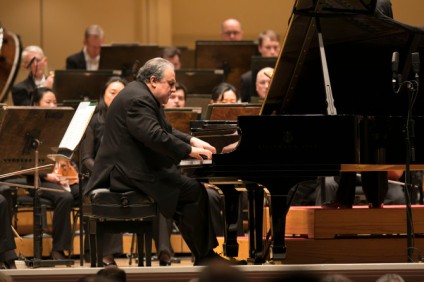 For his part, Bronfman demonstrated both the strength and the lyrical warmth that Brahms demands of the soloist, while producing a beautiful sound from the piano. His playing was carefully controlled, down to the most delicate passages. This is a killer concerto—Bronfman called it “terrifying”—but he more than survived; he conquered.

Bronfman has said that playing the second movement is almost a religious experience. He conveyed that depth of feeling throughout, once again elegantly spinning out phrase after long lyrical phrase.

The rousing finale wants to drain all of a performer’s energy, but Bronfman seemed to rise comfortably to the challenge—and then to prove the point, tossed off a muscular performance of Chopin’s “Revolutionary” Etude as encore. His grand virtuosity and musicianship added luster to the evening.

Is this the season for hijinks between movements? On both of his concerts earlier, guest conductor Marcelo Lehninger offered comments between movements of larger works. Last night, Bronfman acknowledged a scattering of applause after the admittedly virtuosic and impressive first movement with a quick bow from the bench. This elicited laughter, and in turn he and Oundjian—old pals—chatted briefly between themselves.

The concert closed with a work that is not well known, as I heard audience members saying on the way from the auditorium: Rachmaninoff’s Symphonic Dances. The last work he completed, these fantastic dances (as Rachmaninoff initially proposed naming the work) are a sort of reflection on mortality. In fact, the last of the three includes the Gregorian Chant for the Requiem Mass, Dies Irae, a theme that Rachmaninoff brought into a number of his works.

The flighty beginning of the first dance was exquisitely played, and the vast contrasts of dynamics, rising from the slightest gestures to powerful climaxes and fading back into nothingness gave great drama to the music. Oundjian has said this is one of his favorite pieces, and as he performs it, finding all the expressive depth and beauty it contains, it is easy to see why.

The powerful performance showed just what the CMF orchestra is capable of. The score requires a rich string sound and great virtuosity from the winds, all within a musical fabric of great flexibility. It is a sure sign of Oundjian’s orchestra leadership that the performance succeeded at such a high level.

A special word should be said for the woodwind, horn and trumpet sections, in both Brahms and Rachmaninoff. I heard the delicate horn solos in the Brahms, the saxophone solo in the first Rachmaninoff dance, the exposed trumpet entrances, the rare (and no doubt relished) star turns by the bass clarinet, the bassoons and all the other woodwinds with great pleasure.

Last night’s program will be repeated tonight at the Chautauqua Auditorium. You may purchase tickets here.