Music by Bartók, Piazzolla and Schubert—all drawn from folk sources 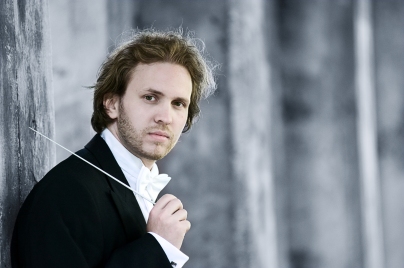 In comments before the concert began, he noted that the three composers—Bartók, Piazzolla and Schubert—seem to have little in common, but the common thread is music reflecting their individual national cultures—from Hungary, Argentina and Austria, respectively.

The specific pieces he selected were Bartók’s Romanian Folk Dances, based on dances that the composer recorded in Hungarian villages as part of his folk music research; Piazzolla’s Four Seasons of Buenos Aires, drawn from the native tango music of Argentina; and Schubert’s Symphony No. 3, incorporating music of the Austrian countryside.

All are pieces that benefit from high energy, and that Danzmayr provided. Not that the performance was unblemished, but the energy comfortably overcame any imperfections.

Originally composed for piano, Bartók’s seven Romanian Folk Dances were performed in the composer’s own setting for small orchestra. The challenge is to create the rhythmic freedom of eastern European folk dances within orchestral sections. This is well accomplished in three movements, where Bartók hands the melody to solo players—clarinet in the second dance, piccolo in the third, and solo violin in the fourth. The soloists played with appropriate verve, with firm orchestral support.

Danzmayr gave the full ensemble portions of the score all the rhythmic impulse that a folk dance needs, driving right past a few moments when the texture became thick and murky. 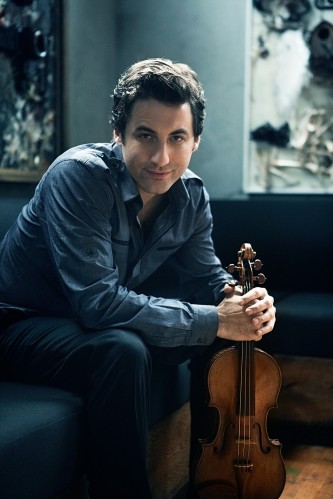 The hit of the evening was the Piazzolla Seasons of Buenos Aires, a response to Vivaldi’s famous set of concertos, performed by the CMF strings with soloist Philippe Quint. A player who has his own ties to the style of Piazzolla’s music, Quint delivered a passionate performance. This is music that should be enjoyed, and everyone on stage seemed to be having fun. The audience’s enjoyment was evident by the applause, hesitantly between movements and raucously at the end.

The program had the seasons listed out of order—Summer, Winter, Fall, Spring—but in the event Quint played them in the usual order: Summer, Fall, Winter Spring. This is music of rapidly shifting moods, sometimes capturing the rough tango of Buenos Aires dance halls, sometimes more sultry, sometimes fiery. Quint seems to have them all in his hip pocket, moving from one mood to the next with no visible strain, and then filling the hall with a beautiful tone in the last movement’s lyrical moments. Conductor, orchestra and soloist danced together without a stumble.

To close the concert, Danzmayr and the orchestra gave a sparkling performance of Schubert’s Third Symphony. A native of Salzburg, Danzmayr said in an earlier interview that when you grow up playing the music of the Austrian countryside, as he did, “you have [the style] in your bones and in your feelings.”

He also said that this symphony is one of his favorites, and that was reflected in the performance. His enthusiasm for the music was evident, while his attention to detail, in the selection of tempos, in the phrasing, in the application of dynamics, made every gesture and phrase effective. The solemn slow introduction was followed by a cheerful romp and the sprightly, folkish “slow” movement positively danced along.

The minuet’s bumptious beginning suggests that Schubert had heard some Beethoven, but it then settled into a pleasingly pastoral second theme and trio. The bustling finale suffered only the occasional smudge in the strings, showing how close to the edge Danzmayr’s tempo really was. As so often in Schubert the composer’s delight in his own music made it hard for him to let go, as the movement rushed to a rousing finish.

The good cheer, the light orchestra texture, the sheer joy of the music makes the symphony seem less impressive than it really is, but careful attention to last night’s performance revealed its beauty.