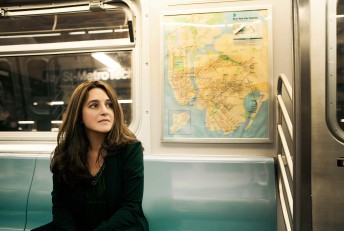 Glass’s Piano Concerto No. 3 was written for Dinnerstein, and her Boulder performance was part of the world premiere tour of the concerto. It is a major work that should achieve considerable success with audiences in the years to come, as it did last night in Macky.

Glass’s characteristic gestures are easily found in the score, but they have been transfigured. His usual pulsing rhythms are more gentle, serving and supporting melody and harmony. The music has an emotional immediacy throughout, and the third movement in particular has moments of seductive beauty. The ending is extended, creating a hypnotic, almost ritualistic quality around lovely bits of melody. The slow unfolding of these final thoughts quietly recalls compelling passages from Glass’s previous works.

At 80, Glass is entitled to write with a more valedictory and consoling tone, but there are likely two specific reasons for the nature of this piece. First, it was written for Dinnerstein. When she told Glass how much it fit her playing and her personality, he said “Well, I wrote it for you.” It’s hard to know how her influence manifests itself, but I heard a deep poeticism and introspective lyricism, qualities associated with Dinnerstein’s playing that also mark many moments in the concerto.

The other reason is the influence of J.S. Bach, a composer Dinnerstein is renowned for playing and whose Keyboard Concerto in G minor will be paired with the Glass on the current tour. There are no quotes or direct echoes of that specific piece in the Glass score, but I found it notable that the music is shaped largely by harmonic patterns, as if it were based on a Bach-like chorale, but one that wanders into unpredictable turns and paths.

Dinnerstein had both the notes and the inner life of the piece well under her fingers. Playing with evident love for the concerto, she found depths of expression in the music, including some of the simpler moments technically. Her playing was ably supported by Butterman and the Phil.

Not everyone loves Glass, but for me the performance was deeply moving, revealing both the quiet humanity of the composer and the commitment of the soloist. Standing ovations are de rigueur in Boulder, but this one seemed especially heartfelt.

The rest of the program was musically fascinating—a symphony by C.P.E., son of J.S. Bach, and Schoenberg’s Verklärte Nacht (Transfigured Night) on the fist half, and J.S. Bach’s G minor Concerto preceding the Glass. However, all three works, calling for only strings, suffered the same fate of being swallowed by Macky Auditorium’s unforgiving acoustics. Small ensembles, and strings in particular, invariably sound distant and a little cold in the hall.

The C.P.E. Bach Symphony received a refined performance, with transparent textures, and a smooth transition between the first two movements. But the characteristics of C.P.E. Bach’s mid-18th-century Rococo style, the use of sudden and shocking harmonic jolts and unexpected stops and starts, lost the larger share of its impact in the hall. The more’s the pity: C.P.E. Bach is a fascinating composer who should spice up any program—but only if the effects land with the audience.

Butterman introduced Schoenberg’s piece with a useful listener’s guide to the main ideas of the music, and how they are laid out in the score. One of the great musical/emotional outpourings of the late Romantic musical style, Verklärte Nacht portrays a passionate story of forgiveness and redemption, in which a dark and gloomy forest path is transfigured into a glittering scene of starlit beauty by the power of love.

The audience is meant to be enveloped in the lush harmonies of the score, and indeed I could see that the orchestra was playing with great intensity. Alas, the sound again was swallowed by the hall. It was well conducted and well played by the orchestra, but from Row U, it sounded all too polite and restrained to fit a story of passion.

The performance of J.S. Bach’s G-minor Concerto was a little cotton-woolish in the orchestra when more lean muscle would serve the music better, but likely this is another manifestation of Macky’s acoustics. Dinnerstein played with a clear sense of line and overall form. With a Steinway grand and modern string instruments, this was not a historically-informed performance, but Bach’s music is so ideal in conception that it does not depend on the medium.

All other issues aside, Dinnerstein, Butterman and the Boulder Phil scored a great success with the Glass Concerto. It’s only January, but that should be on any list of the year’s highlights.