Piano, clarinet and violin in music of the early 20th century

The Boulder Bach Festival enters a new realm Saturday (Dec. 9), performing music from the early 20th century while demonstrating unusual historical perspectives on three familiar instruments: the piano, the clarinet and the violin.

The concert will be at 7:30 p.m. in Longmont’s Stewart Auditorium (tickets). It will not be repeated elsewhere.

Each of the three will be subtly different from modern instruments, and each will be only one example of the many variations on the same instrument that have been heard, at different times and in different locations. So the concert will be both a musical program and a demonstration of the relationship between the music of a particular era and the instruments on which it is played.

Comprising seven pieces from the 20th– and 21st-centuries, the program reflects the BBF’s goal of “navigating the waters of music history with J.S. Bach as our compass.” It will follow several distinct threads from the early 20th century to works by living composers. Using different combinations of the three players, the program will be:

“There’s no piece longer than 10 minutes on the program,” Carrettin says. “I really wanted to tell short stories, each one being distinct in its tonal language, in its rhythmic drive and its abstraction, so that we could focus on the special qualities of each instrument.”

It was Hawley’s clarinet that inspired the concert. “A year ago I was judging the Art of the Duo Competition (in Boulder),” Hawley says. “We were talking about (Gajic’s) Érard piano and what music would go with it. I said, ‘I would love to hear some of the music that was written for the clarinet, with the instrument of the time and the piano of the time.’”

That idea led to Saturday’s concert, which will be Hawley’s first public performance on his vintage clarinet. 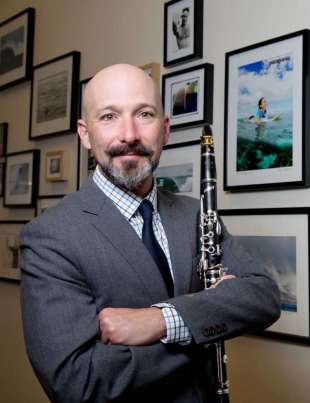 Richie Hawley with a modern clarinet

Hawley found the clarinet 27 years ago when he was a student at the Curtis Institute in Philadelphia. He was looking for old clarinet mouthpieces, which often have qualities that he likes. He found an old instrument in an estate sale and bought it for $35 in order to get the mouthpiece. But when he opened the case, he was disappointed to see that the mouthpiece looked new.

It was his teacher, Donald Montanaro of the Philadelphia Orchestra, who realized what Hawley had. “He said, ‘No, that’s a vintage mouthpiece from the ‘20s and it’s never been played!’” Hawley explains. “He said ‘‘This clarinet is brand new.’ So someone had this amazing professional clarinet, top of the line from 1919, and never played on it.”

He had the clarinet restored to playing condition, but never found much use for it until he realized how well it would match the 1895 piano. “The fingerings are the same as now, but the sound is dramatically different,” Hawley says. “It has a very dense, compact, small sound, and it doesn’t project like the modern instrument.”

He has not had a chance to play with Gajic on her 1895 piano, or with Carrettin, until this week. “I don’t know what it’s going to be like to hear these instruments together,” Hawley says. “It’s going to be a very, very steep, yet mandatorily fast learning curve.”

Parallel strings in the Érard piano

This will not be the first time Gajic has brought her piano to Longmont for a BBF concert. Because the instrument is straight strung—meaning all the stings run parallel, unlike modern pianos that have bass strings that cross over the others—it has a very clear, transparent sound that is subtly different in different registers. This matches well with the clarinet’s compact sound. (Read more about the piano here.)

Carrettin explains that there were several different types of violin strings available before the 1960s, when the nylon core string was developed. These included pure gut, gut wound with metal alloy, and steel, all of which are available today from specialist string makers.

“There are a lot of options in a historical setup,” he says. Depending on the type chosen for each of the four strings, “violinists had the option of treating each string as a voice, or having two registers, perhaps and alto and tenor if you want to think about it that way, with two strings in each register.

From left: Three wound gut and one steel string on Carrettin’s violin

“The string choices on different violins will determine how homogenous the tone is across the four strings, or how much the registers are distinct from one another. What I have chosen to do is three strings with a gut core wound in an alloy, and then a top string of steel.”

Carrettin sees several themes that run through the program. With the inclusion of the Bartók Romanian Folk Dances and the modern rags, one of those is dance., which is the basis of much of the music of Bach and other Baroque composers. “I wanted to have some very obvious dance music on this program that did not come out of the Baroque,” he says.

Ragtime is also connected to the music of Antheil, “an American in Paris in the 1920s hanging out with Stravinsky and Ezra Pound. The reason I thought of adding the ‘Graceful Ghost Rag,’ which is tonal and beautiful and melodic, was to connect to these abstract ragtime moments in the Antheil.”

“There’s a lot of personal connections for me here in my life, as a student and as a musician,” he says. But more important is the kaleidoscopic variety of the program he has put together.

“As we program more and more chamber music on the Bach Festival, my goal is to offer programs that are distinct,” Carrettin says. “I’m hoping that (this concert has) something for everyone. It has consonance, dissonance, abstraction, melody, surrealism. It has dance, it has song, it has banging on the piano, and it even has drums at one point.

“It’s kind of got everything, and that was the idea.”