Lehár’s Merry Widow waltzes into Macky Auditorium (and does other dances, too)

Franz Lehár’s Merry Widow, the classic Viennese operetta, is a delicious platform for wonderful singing, graceful dancing, colorful costumes, and an inexhaustible supply of humor. But in the hands of stage director Leigh Holman, director of the CU Eklund Opera Program, there is a serious side too. 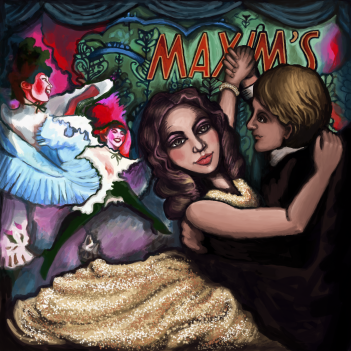 The major roles are double cast, with different singers on Saturday and Friday/Sunday. The performances will be sung in German with English titles.

“People think of it as light, and it is a funny show,” Holman says. “But I’ve taken a little bit more serious tone with it—not to scare anyone off because it’s still very hilarious and fun, but I’ve been doing a lot of thinking about second chances.”

In fact, it’s a second chance for the two main characters that drives the plot of The Merry Widow.

As the operetta opens, the fictional east-European country of Pontevedro is facing a budget crisis. At their embassy in Paris, the ambassador hopes to arrange the marriage of the wealthy widow Hanna Glawari with Ponetvedro’s most eligible bachelor, Danilo. That would, he believes, save the country by keeping her money in Pontevedro. But Paris is filled with men—bachelors and married alike—who would love to get their hands on her and her money, making the ambassador’s matchmaking all the more urgent.

Of course there are many other comic-opera complications with many other couples, but you want to keep your eye on the ball, which is the Hanna-Danilo relationship. As Holman explains, this is where the second chance comes in, because they have a history.

“They fell in love years ago when she was a farm girl,” Holman says. “He was wealthy and a nobleman, and his uncle did not approve of their relationship.” Because Danilo hesitated to oppose his uncle, Hanna ended the relationship and got revenge by marrying another wealthy suitor.

“I wanted to deepen the understanding of the audience for what this couple had gone through,” Holman says. “So I decided to do a pantomime during the Overture, with a young Danilo and a young Hanna in front of the curtain. We get to experience their young love, and the situation where the uncle disapproves and Danilo hesitates. He eventually asks her to marry him, but she shows him her ring, that she’s already married. So we get all of that before the curtain opens.”

After the Overture, the curtain opens on the embassy party. Hanna’s much older husband has now died, leaving her a fortune, and Danilo has buried his sorrows by being a feckless man about Paris. ”They see each other again after all these years,” Holman explains. “Now they just love to spar with each other all the time, always testing each other.

“We really wanted to play on the idea, what would happen if we all got a do-over, if we had the chance to go back again? The question is, would we love to [do that]? We don’t know how it would end up, but we all wonder.”

This being operetta, you can count this second chance ending up with a happy outcome for all of the mixed-up couples. And you can also count on a lot of great entertainment along the way: a bit of farce and mistaken identities, gorgeous individual arias, hilarious ensembles, wonderful “Pontevedrian” folk music and costumes, and plenty of dancing.

“We are having a wonderful time,” Holman says of herself and the cast. “It’s just a joy to go to work every day. We walk into the rehearsal hall and they’re all warming up, everybody’s dancing, the Viennese Waltz, the polka, the mazurka, the everything!”

Because Holman is devoted educator as well as opera director, “the everything” has great benefits for the students. “It’s the whole triple threat,” she says. “They’re singing, dancing, and acting with [spoken] dialog, so it’s a great opportunity for them. And comic timing! There really is an art to that and it’s something that has to be learned. They’re really grasping it and that’s exciting to see.

In other words, young opera singers have to be ready when they leave school because—unlike Hanna and Danilo—they won’t always get second chances when opportunities appear. And neither do audiences; The Merry Widow is only in Macky this weekend.