The (R)evolution of Steve Jobs, premiered July 22 by the Santa Fe Opera and performed last Friday (Aug. 4), is a remarkable first opera by the composer and electronic DJ Mason Bates.

Equally remarkable are the high-tech and musical resources that the Santa Fe Opera assembled for the production, which is eloquent testimony to the company’s unmatched commitment to new opera. I have no doubt that this work will be high on the list of important premieres in the SFO’s history, both for the quality of the work and for the excellence of its execution.

The opera itself and Santa Fe’s production in particular represent an impressive monument to the marriage of arts and technology. Performances feature an extensive sound design that blends lightly amplified voices, guitar and other naturally produced sound with electronics into an overall sound scheme, and a scenic design using projections on a series of movable screens that seamlessly transport the locale from the Jobs family’s famous garage to the Apple boardroom to Yosemite National Park.

The result is a powerful work that immerses the viewer in an artistic and emotionally charged sensory experience that is in some ways more than a performance. It is a 21st-century Gesamtkunstwerk (“total work of art,” Wagner’s term for his own works) and a definitive statement of what can be accomplished in theaters today. And it suggests what might be achieved in the future. 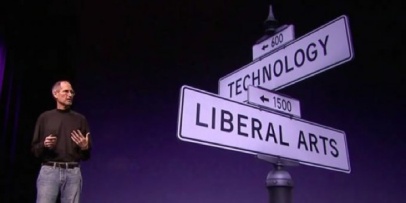 One of the most performed composers in the United States today, Bates lives and works at the intersection of art and technology. This made him an ideal choice to write an opera about Steve Jobs, who once said “I think our major contribution was in bringing a liberal arts point of view to the use of computers.” It was Bates who suggested Jobs as the subject of his commission from the Santa Fe Opera, which was then completed with librettist Mark Campbell.

Garrett Sorenson as Woz and Edward Parks as Steve Jobs in the famous garage. Photo by Ken Howard for the Santa Fe Opera.

One problem that Campbell and Bates confronted was the absence of obvious opera-worthy drama in Jobs’s life. Product design and the distribution of corporate stocks are not usually operatic. In a way, The (R)evolution of Steve Jobs unfolds as a series of powerful character portrayals, of Jobs himself, Apple co-founder Steve Wozniak, Jobs’ early girlfriend Chrisann Brennan, the Zen monk Kōbun Chino Otogawa, and Jobs’ wife Laurene Powell Jobs.

But Campbell and Bates also found ways to build an effective dramatic arc of rising tension, punctuated with humor and quieter lyrical moments. A single act of 90 minutes is arrayed in 18 scenes plus a prologue and epilogue. Many iconic scenes from Jobs’ life are included: the development of the first Apple, his attraction to Zen Buddhism, his initial denial of his paternity of his daughter Lisa, and others.

Recognizing that Jobs was a showman and his product announcements were very theatrical, Campbell placed the first scene at the greatest of these, the 2007 unveiling of Apple’s transformative “one device,” the iPhone. This pulls the audience in from the first, launching the opera directly into the story of a man we remember and a product that has profoundly touched our lives.

The remaining events are carefully arranged not in chronological order, but in a taut dramatic structure with a powerful emotional climax near the end. Borrowing the Japanese concept of ensō, the hand-drawn circle that represents enlightenment and the minimalist aesthetic that Jobs embraced, the libretto often circles back to earlier scenes, reinforcing the most important events while creating a kind of musical structure. 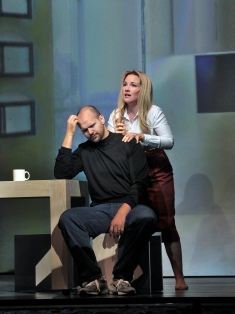 Sasha Cooke as Laurene and Edward Parks as Steve Jobs at the opera’s emotional climax. Photo by Ken Howard.

The most dramatic moments—Jobs’s denial of paternity of his daughter Lisa, his brutal abuse of employees and his departure from Apple in 1985—are placed together about two-thirds of the way through. This forms the opera’s climactic scene, and in a perfectly constructed pattern of tension and release, it is immediately followed by a return to 2007 and the opera’s emotional core, when Laurene forces Jobs to face his own mortality.

The opera ends with gestures of symmetry. In the final scene at Jobs’ memorial service, Laurene recalls the first scene and the iPhone launch when she sings “The very second this is over, for better or worse, everyone will reach in their pockets or purses and . . . look at their ‘one device’.” Completing the symmetry, the epilogue briefly recapitulates the prologue, when Paul Jobs gives his young son a work bench as ”a fine place to start.”

Bates expertly combines the acoustic orchestra and electronics, as in his previous works. He creates a different sound world for the different characters: guitar and electronica for Steve Jobs, flute and Tibetan bowls for Kōbun, strings for Laurene Jobs. These are arrayed skillfully, and the build-up of sound in the climactic scenes integrates well with the visual electronics and the rising dramatic arc.

The vocal part are never less than serviceable, and they get better as the opera goes along. The distribution of the voice parts and the strategic placement of songs for the individual singers adds to the characterizations. The songs, or arias if one prefers, emerge comfortably from the musical fabric, and they are all expressive. Jobs’ “Something we play,” Kōbun’s “Take one step,” and Laurene’s passionate “”When will you let in the truth?” stand out in my memory, but there were other equally enjoyable numbers.

Jobs has to carry the opera: he is on stage almost every minute, and the opera largely takes place within his mind. In Edward Parks Santa Fe Opera has a singer who has a solid baritone voice and looks enough like the later Steve Jobs to satisfy audiences who remember him—tall, bearded, balding, and of course wearing a black turtleneck.

Parks’s movements, gestures and poses accurately captured what we remember from Jobs’ photos and public appearances. He was strong enough to dominate scenes vocally and physically when required, but he was able to turn softer at the end. His successful performance was one ingredient the opera could not survive without. 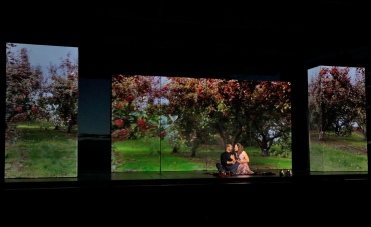 As the women in Steve Jobs’s life, Sasha Cooke as Laurene Powell Jobs and Jessica E. Jones as Chrisann Brennan sang well and were effective character actors. In her several scenes, Cooke found just the right level of dignity, loving compassion, and flirtatiousness when she first meets Steve. Jones was pert and funny when she and Steve took LSD in an apple orchard, and she was even better when she faced Steve Jobs’s final rejection, going from wounded and needy to crushed and defiant 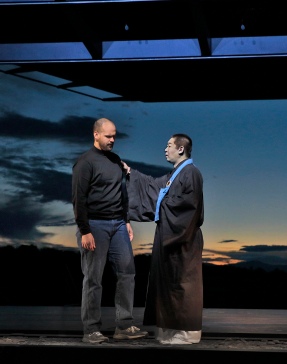 Wei Wu, a 2013 University of Colorado graduate whose blossoming career has taken him to major opera companies around the world, sang with a deep resonant bass as Kōbun. In a role filled with both wisdom and wry humor, he captured the changing nuances perfectly. Garrett Sorenson brought a soaring, resonant tenor and some passion at the climactic moments to the relatively small but essential role of Wozniak. Kelly Markgraf as Paul Jobs and Mariya Kaganskaya as a calligraphy teacher made solid contributions.

Michael Christie, well known in Boulder as the music director of the Colorado Music Festival for 13 years, held the ensemble expertly together. There is a lot to manage, and he seemed in control every minute, managing the flow of the complex score and getting the big moments right where they should be. The chorus under the direction of Susanne Sheston sang Bates’s complex music with precision.

The previously praised sound design by Rick Jacobsohn and Brian Loach was expertly done and always well balanced. Opera singers generally hate amplification of voices, but here it is part of an overall electronic concept, and it was subtle enough that I often could not hear that the singers were amplified.

Victoria “Vita” Tzykun’s scenic design and the projections from the London and New York-based international firm 59 Productions created an appropriately high-tech feel along with the various sites of the story. It is probably the highest praise to say that the costumes of Paul Carey and direction of Kevin Newbury fit the familiar times so well as to be almost unnoticeable: everything looked exactly right.

There are still four performances of The (R)evolution of Steve Jobs to come in Santa Fe, including one Aug. 22 that was added to the schedule due to demand and that has the most seats available; click here for ticket information. The last Santa Fe performance is Aug. 25. The opera will later be presented by co-commissioners the Seattle Opera, the San Francisco Opera, and the Indiana University Jacobs School of Music.