Michael Butterman and the Boulder Philharmonic

Last night the Boulder Philharmonic and conductor Michael Butterman ended a remarkable season with a remarkable concert, one of the most interesting they have done.

The mostly-Italian program included one of the most brilliant orchestral showpieces of all time, a world premiere, and several pieces that are rarely played. If you love making new discoveries, as I do,  this was a fun program.

First the world premiere—and the one non-Italian piece on the program: Invisible Cities, Double Concerto for violin, guitar strings and percussion by Stephen Goss. The composer is Welsh, although the concerto is based on the fascinating novel of the same title by the 20th-century Italian writer Italo Calvino. Soloists were Charles Wetherbee, violin and Nicolò Spera, guitar.

The novel imagines a series of conversations between Marco Polo and the Mongol Emperor Kublai Khan. In an intricate design, the novel has Polo describe 55 cities to the Emperor, all of which turn out to be facets of Venice, his home. Dispersed among the cities are a series of conversations, in which Polo and Kublai Khan are gradually able to communicate more clearly across their linguistic and cultural barriers.

In a similarly intricate design, the concerto alternates between orchestrally accompanied movements representing cities and duos without orchestra representing the conversations. Particularly ingenious are the duos, which represent musically the growing accord between Polo and the Emperor through music of growing lyrical beauty.

The musical design is clever but not cryptic, and it is executed without ever seeming forced. The piece as a whole is accessible, expressively convincing and well constructed. This is a work of significance that should be taken up by other guitar-violin duos.

The style is largely based in conventional gestures of contemporary orchestral music. If not original, the musical elements are used to good effect, as listeners can recognize and enter the expressive realm of each movement. Where the music is more imaginative, as in the interaction between the soloists, the creativity is never originality for originality’s sake; it always serves the expressive goals. 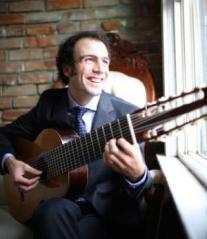 The soloists played with sweet expression together, and with greater intensity when required. Their sounds were well balanced, reflecting prior work together as a duo. At their best they rose to all the demands of Goss’s pleasing new work.

The two works preceding the concerto were undoubtedly new discoveries for most in the audience, and both were 20th-century pieces based on older music. The first was Stravinsky’s Monumentum pro Gesualdo, orchestral arrangements of uniquely strange and adventurous Renaissance madrigals by Carlo Gesualdo.

Stravinsky’s setting is strange in its own way, with discontinuous bits of harmonic and instrumental color shifting about the orchestra and managing to sound like both Gesualdo and Stravinsky. This score, nicely played last night, fits the Boulder Philharmonic and its outstanding individual players well.

That was followed by Luciano Berio’s Four Original Versions of Boccherini’s Return of the Nightwatch from Madrid. Sometimes an enfant terrible of modern music, Berio also wrote highly approachable scores built from older music, of which this is one.

Four different versions of a movement by the 18th-century Italian composer Boccherini are arranged for modern orchestra and layered on top of one another. At times they match perfectly, but at other times they do not, creating delicious and unexpected dissonances that pass quickly.

Depicting the approach and departure of the Nightwatch, the score culminates in a rousing setting of the tune, and then dissipates into silence. It was played with verve, as once again the individual contributions of the players fit well into the orchestral mosaic.

After intermission, Butterman and the orchestra gave an invigorating reading of Verdi’s Overture to Nabucco, with all the turns of mood well traversed and quite a bit of excitement for the explosive ending. Puccini’s Chrysanthemums, an ingratiating minor work, was played with expression, if not the plush, ermine-fringed sound one would like to hear.

The concert ended with a sure bet, Respighi’s Pines of Rome, a piece guaranteed to rouse the audience from their seats. In the hands of the Boulder Phil, Respighi’s orchestra worked its magic: it shone when it should shine and sparkled when it should sparkle, the sudden contrasts were contrasting and the abrupt changes of scene were well delineated.

You could not have a more rousing ending for a season.