“Nature and Music”: one of Boulder Phil’s best performances

The concert opened with the swirling, magical sounds of a new score from Stephen Lias, and ended with the players waving green bandanas in the air.

Last night (March 25), the Boulder Philharmonic and conductor Michael Butterman presented “Nature and Music,” the same program they will perform Tuesday, March 28, in the Kennedy Center Concert Hall in the nation’s capital as part of the first Shift Festival for American Orchestras. 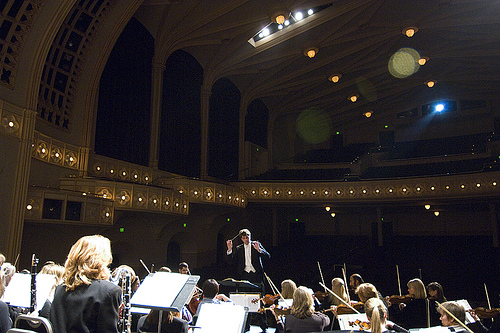 Michael Butterman and the Boulder Philharmonic

The Boulder Phil is one of only four orchestras invited to the festival, and the only regional orchestra. As reported earlier in Boulder Weekly, their application to the festival, based on the orchestra’s programming, community outreach, and collaborative performances, was considered by the festival panel to be the “gold standard” of what they were looking for.

To represent the Boulder Phil’s recent emphasis on music written to celebrate nature, their program for the festival featured a new orchestral score commissioned from Lias as part of the National Endowment of the Arts’ “Imagine Your Parks” initiative, celebrating the 2016 centennial of the National Parks Service. Titled All the Songs that Nature Sings, it was inspired by Rocky Mountain National Park.

Other works on the program were drawn from previous concert programs: Jeff Midkiff’s Mandolin Concerto, with Midkiff as soloist; Ghosts of the Grassland by Steve Heitzig; and Copland’s Appalachian Spring, performed with choreography by Boulder’s Frequent Flyers Aerial Dance company.

Lias took his title from the writings of Enos Mills, “The Father of Rocky Mountain National Park.” Accompanied by slides of the park selected by Lias, the music suggests a cinematic view of the park’s high country, starting with streams and lakes, culminating with rocky crags and ridges, and ending with mountain wildflowers.

Lias has written a thoroughly engaging piece. The almost impressionistic haze of sound of the opening measures pulls the listener into a world of nature at its most lovely and benign. As the music swells, lyrical melodies and powerful chordal passages are enlivened by rippling lines and repeated chords, forming a musical metaphor for scenes in nature that are always in motion: water rippling, leaves fluttering, light flickering.

The score reaches a rugged climax with stark brass chords, accompanied by views of the park’s most impressive peaks. It then ends gently, with a tender violin solo that was ably played by the Phil’s concertmaster, Charles Wetherbee.

Butterman and the Boulder Phil had the music well under control from the beginning to the end. As played last night, the cinematic sweep of the score created a clear outline. This is a thoroughly successful piece that should find appreciative audiences wherever it is performed.

Midkff’s Mandolin Concerto, subtitled From the Blue Ridge, is a mix of classical idioms with folk and bluegrass, all of it sounding comfortably American. The lightening lines of the first movement do not have much to suggest music from the Blue Ridge Mountains, other than the folksy sound of the mandolin. The second movement recalls Copland ‘s Americana, filled with a nostalgic sweetness. The finale settles into a jazzy bluegrass groove that fits the mandolin and its natural idioms perfectly.

From the rapid fire opening, to the plaintive slow movement, to the down-home finale, Midkiff was on top of every mood, and his final virtuoso flourish brought the audience to their feet. He rewarded the cheering crowd with his own arrangement of “Monroe’s Hornpipe” by the great bluegrass mandolinist/songwriter Bill Monroe.

It does no dishonor to Heitzig’s Ghosts of the Grassland to say that it has the emotional immediacy of a good film score. It is easy to imagine the dramatic gestures and mood changes representing—what exactly? The dramatic weather of the American prairie, or a primordial scene of bison and prairie grass (both represented in the percussion section)?

But everyone has their own imagination. Once again the Boulder Phil conveyed the musical drama well, and piping squeals notwithstanding, I believe that no prairie dogs were harmed in the performance.

Originally written as a ballet, Copland’s Appalachian Spring is obviously suited to various forms of interpretation, of which Frequent Flyer’s aerial dance represents one of the more original. As realized by Nancy Smith, the choreography has some magical moments that are almost ritualistic in effect, especially the beginning and the end.

Frequent Flyers with the Boulder Philharmonic

In between, the dancers, for all their impressive strength and grace, did not always avoid an element of spectacle. What they do is so obviously difficult, so unimaginable to most in the audience, that it becomes hard to translate admiration for the athleticism of the performance into appreciation for its artistry. Nonetheless, their Appalachian Spring is a remarkable achievement.

As impressive as Frequent Flyers were, it would be a mistake to overlook the orchestra. Clearly primed for the festival, they presented just about the finest standard work I have heard them perform. You may hear more splashy performances, but Butterman’s restrained approach is more in keeping with Copland’s original conception, and it brings out all of the score’s considerable tenderness.

This is a very attractive program, and one that fits the orchestra’s strengths. Word is that the Boulder Phil is outselling the other orchestras in the festival, and they stand to make a very solid impression.

As for the green bandanas: The Shift Festival sent bandanas to every orchestra—”because we like bandanas,” Butterman said, sounding bemused. And so as the audience stood and cheered its well wishes to the orchestra for their trip to Washington, the players stood and waved their bandanas in response.

Maybe that’s what they were for: I could not imagine a more cheerful bon voyage than 80 green bandanas waving from the Macky stage. I join all of Boulder in wishing them a safe trip and a great reception at the Shift Festival.