“The most important aspect of an orchestra is to really be in the community.”

—Elliot Moore, candidate for Music Director of the Longmont Symphony

Each of the four candidates for music director of the Longmont Symphony Orchestra will conduct a concert during the 2016–17 season. When each candidate visits Longmont, I will take the opportunity to introduce him (and yes, they are all male). The questions will include serious questions about the job of a music director, but also questions that help introduce each of them to the reader. I hope this will give a clearer picture of the strengths of each candidate.

The first candidate, Elliott Moore, will conduct the orchestra on  Saturday, Nov. 12. The following works are on the program: Mozart’s Symphony No. 32 in G major; Saint-Saëns’ Piano Concerto No. 2 in G minor, with pianist Vivian Choi; and the Ravel orchestration of Mussorgsky’s Pictures at an Exhibition.

Here are his answers to the questions I asked: 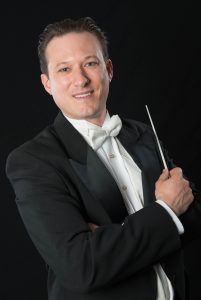 PA: What attracted you to the Longmont Symphony?

How do you think about programming for a community orchestra? What would a season of the LSO with Elliot Moore look like?

Whenever I think about programming, I consider a couple of different things. I consider, what does the audience want to hear, what do they expect to hear? I also always think about what will further the artistic achievement of the orchestra. If they haven’t played much from the classical period, that is something that I would want to begin focusing on, or, if they haven’t done much modern music, perhaps doing some living composers would be good for them to start doing, so that they become a well rounded orchestra in all the different musical genres. And then, once I have sort of the overall season done, I look to see if there’s something for everyone.

I think that pops plays a role in a season’s program, and the orchestra certainly has a pops series. When there are pops concerts, it’s important to still showcase the orchestra. One other thing: Something that should be in the programming would be opportunities to work with other local arts organizations, whether that be modern dance ensembles, or videographers, or choreographers—all kinds of different artistic media that the orchestra can work with in order to connect the dots within the community.

There have recently been alarm bells for classical music and orchestras, especially the larger orchestras that have had serious budget issues and labor disputes. Do you think that these problems will affect community orchestras as well? And if not, what do you think are the challenges for the smaller orchestras?

I see it as being less of an issue for the Longmont Symphony. What I think is the most important aspect of an orchestra, period, is to really be in the community. What are the specific needs of the community, and is the orchestra playing a role to address those needs? I know in Longmont there is an Hispanic population of approximately 30%, and I know also that they tend not to be coming to the LSO concerts. How, in an authentic way, can the Longmont Symphony bridge the gap to that community? Connecting different organizations, to create one incredible cultural community—I think that that is important. And I think that once you really connect with your community, in an authentic way, really thinking about it, really considering how to make this community better, then go after that. So making a plan and then taking action. When those things are done, the chances of an orchestra folding are much less because they are in the community and they are making a difference, and their presence matters, and the public knows that, they understand that and they feel that.

How do you balance and prepare for the various aspects of the conductor’s job: the musical requirements, the social demands with the public, and the diplomatic demands with contributors, the board and musicians?

That’s a really great question. Let’s talk about the musical first. The job of a conductor is largely one where you are alone a lot of the time, studying the scores. That is what informs inspiring rehearsals. It’s impossible to have inspiring rehearsals if you don’t really know your music, you don’t know the context in which it was written, or you know don’t what inspired the composers of the music you’re performing. That is probably the single most important aspect.

When conducting, I imagine myself as a conduit. I empty out and then I fill up with the music. It’s like a straw that’s flavored with chocolate flavor: when you drink milk through the straw you get chocolate milk. My experiences as a human being, they’re like that straw, so when the music flows though me, it has that flavor of Elliot, Elliot’s experiences, Elliot’s beliefs.

About you, now: Where did you grow up?

I grew up in many, many different parts of the United States and the world. I was born in Anchorage, Alaska. I lived in south Denver for 6 months when I was 6 years old. I lived in Texas, for about 10 years, in Midland and Plano. Then I finished high school in Cleveland. I lived in Switzerland for 6 years—I speak French and German, I lived in the French part and the German part. And I’ve lived in New York City and now Detroit.

Did you come from a musical family?

The joke is, my mom plays piano, my dad plays tennis.

Who are your musical mentors?

Mstislav Rostropovich presenting an impromptu concert after the fall of the Berlin Wall, Nov. 1989

I have a couple of musical heroes. The first one is Mstislav Rostropovich, the great cellist/conductor, in part maybe because he’s a great cellist and conductor, and I am also a cellist. What I would say about him that has been so inspiring to me over the course of my childhood and career has been the humanity that he shows to everyone. There are so many stories, but one was that there was a stage hand or maybe a custodian at the National Symphony where he worked, who passed away. Rostropovich wanted to go to the funeral, which is amazing for a music director to go to the funeral of a stage hand. He couldn’t make it to the funeral, so he went and privately played his cello at his casket, and said to the orchestra’s executive director, “I don’t want this to be a media thing, this is just me expressing my feelings about this man and to his family.”

There’s a great photo I had up in my bedroom when I was child, a photo of Rostropovich letting a soldier sleep on his shoulder. The soldier was supposed to protect him and he was so exhausted he fell asleep and Rostropovich let him sleep on his shoulder, and there was a gun leaning up against his leg. That sort of attachment to all human beings is something that I certainly strive for. The attachment to music and humanity is why he’s my musical hero.

Are there any conductors today whose work you especially admire?

I really look up to Manfred Honeck, the music director of the Pittsburgh Symphony. There are many things that I enjoy about his music making. One is his authenticity at how he brings his experience to conducting. He’s not about being in the spotlight; he’s about putting the spotlight on the music. I think that resonates with their audiences, with the players, with the orchestras with which he works. It’s a breath of fresh air to see somebody come in and be about the music, as opposed to about the spotlight.

Moving on to some less serious questions: Do you have a favorite food?

I feel like this isn’t a very interesting answer. I love all kinds of foods, and I Iove to cook. Often my wife will choose what she wants to have, and she chooses very interesting things that I would have never chosen, and then I cook them. So I love to cook, and I like trying things that are different. I have tried many different kinds of foods, and basically love them all.

Since you lived in Lausanne, Switzerland, what about raclette?

As you know, Colorado is an outdoor recreation state. Do you have a favorite activity outdoors? Or are you too busy shut up in your studio studying scores?

No, I’m not too busy shut up in my studio. The great conductor Carlo Maria Giulini said that if you have to study a score for 10 hours, you should study your score for one hour every day for 10 days and the rest of the time you should spend walking in the woods. Yesterday I had just an unbelievable experience, going up into the Rocky Mountain National Park, all the way up to the top. I love photography, and so I took some really stunning photos. It’s been a blessing to be here, for many reasons, including the outdoors, but also there are just lovely people here.

I have been a Cubs fan since I was 7 years old! There was an LSO Board meeting on the night of game 7 of the World Series, and as soon as the board meeting was over I ran into a sports bar where they had the game on, and I made a lot of new friends!

11.8. Minor typos corrected on this page