Composers go into the wild and come home transformed

Composers in the Wilderness, Denali National Park and Preserve

There is a wildness in the natural world that most of us never meet. But when we do, we are likely to be transformed.

“I definitely feel changed as a person,” Alondra Vega says after brushing against the Alaskan wilderness. “The experience almost seems like it was too extraordinary to have happened,” Cassie To writes.

For Sam Young, an ex-Boulderite living in Los Angeles, touching the wild was an epiphany: “Whenever I come to a place like this, I re-evaluate my entire life and think, ‘Is it all wrong, what I’m doing?’”

Vega, To and Young were three of nine participants in “Composing in the Wilderness,” a workshop led by composer Stephen Lias in Alaska this past summer. The goal of the workshop, Lias says, is to give composers the transformative experience that comes from stepping into the natural world.

“Going into the backcountry of Alaska, I know the experience will change people,” he says. “I wouldn’t presume to guess in what way, but the art that they create will be a manifestation of whatever the change was.

“My favorite thing is putting these composers in that environment and just watching Alaska do its thing on them.”

Lias is known to Boulder audiences for his orchestral piece Gates of the Arctic, premiered by the Boulder Philharmonic in 2014 — a product of Alaska doing its thing on him. He will be back this year, when his All the Songs that Nature Sings will be premiered by the orchestra and conductor Michael Butterman March 25, 2017, and subsequently performed by them at the Kennedy Center in Washington, D.C., March 28.

Working in cooperation with Alaska Geographic, the National Park Service and the Fairbanks Arts Festival, Lias has presented the workshop every year since 2012. It is designed as both an outdoors and an artistic adventure. The composers gather in Denali National Park, where they hike and explore the backcountry. They learn about the wilderness environment from rangers and naturalists.

After Denali, the composers transfer to the remote Yukon-Charley Rivers National Preserve, where they have four days to compose a new piece inspired by their experiences. Written for performers from the Fairbanks Arts Festival, the pieces are all trios or quartets, but adding to the musical adventure, the composers don’t know in advance what instruments they will write for.

The pieces have to be fairly short and simple, because they have to be written quickly and learned even more quickly by the performers. That forms the third and final segment of the workshop: in just a few days the completed pieces are rehearsed and performed, first in Denali National Park, and then as part of the Fairbanks Summer Arts Festival.

The workshop takes nine participants on a first-come, first-served basis. This year there were five women and four men, ranging in age from early 20s to AARP-eligible. They came from all over: two from Australia, one from New Zealand by way of New York, one from Cuba by way of Canada, the rest from around the U.S.

As it happens, I had my own Alaskan adventure this summer, driving, hiking and flightseeing in the state with my two oldest sons. I timed my trip to hear this year’s workshop concert, “Sounds of Nature: Alaska Premieres,” July 26 at the Fairbanks Summer Arts Festival. I saw glaciers larger than counties, and stretches of boreal forest larger than several states. And like the composers in the workshop, the vast land profoundly moved me.

When you face such an overwhelming immensity of nature, full of life but devoid of visible human presence, it’s hard not to be affected.

We are often told that nature is cruel, but that is not really true. Nature understands neither kindness nor cruelty; it is indifferent. That is the great lesson of the wilderness, as I was reminded in Anaktuvuk Pass and the composers, well cared for as they were, encountered in Denali: When we leave our well insulated lives to venture into the real world of nature, we have to be prepared to take responsibility for ourselves.

Washington, very much a city-dweller from New York, had an experience that captures just what Lias hopes the composers will discover in their brush with nature. “We hiked up this high mountain pass and we were given space to go out on our own and just sit quietly and reflect,” she recalls. “I felt like an intruder in some ways — like my breathing was too loud.

“A moth came and landed on my hand, and I didn’t want to move because I was interrupting its space. It was really peaceful, and really real because everything has been undisturbed for so long. Being able to trespass there for a couple of days has been really calming.” 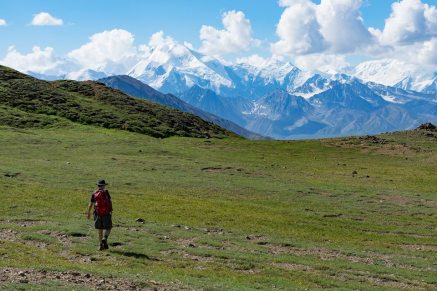 Of all the participants, David John Lang may have captured the power of wilderness most eloquently. After returning to his home, in Adelaide, South Australia, he writes: “I took my journal, in which I often write letters to God, but I was surprised at how little I wrote while I was in Alaska. It was like I was too busy being a listener for once, hearing and seeing and loving God’s creation.

“I felt really, really small, and it was awesome.”