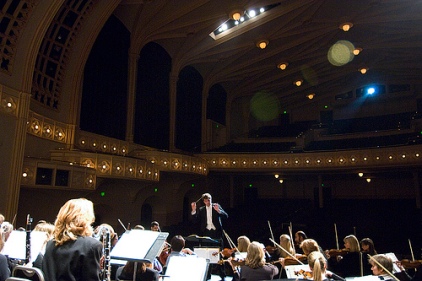 The selections ranged from the familiar—Rachmaninoff’s Rhapsody on a Theme by Paganini—to the not quite familiar—Tchaikovsky’s tuneful Symphony No. 2—to the almost exotic—Francis Poulenc’s Concerto for Two Pianos. The dynamic young piano duo of Greg Anderson and Elizabeth Joy Roe were soloists.

The performance had plenty of energy and many lovely moments, but it also suffered from being the orchestra’s first outing of the season. At times the sound was a little rough, the players not quite together, but in the end the high energy of the performance won out.

Boulder Phil principal cellist Charles Lee introduced the proceedings with announcements of his (20th) and Butterman’s (10th) anniversary seasons with the orchestra. Next, board vice-president Rudy Perez acquitted himself admirably, leading the orchestra in the Star Spangled Banner—not the easiest piece for a non-professional conductor—and then happily turned the musicians over to Butterman.

To open the actual program, Anderson and Roe gave a bracing performance of Poulenc’s Concerto. Unfamiliar enough that Butterman gave a spoken introduction, with a recording of a Balinese gamelan to illustrate one of Poulenc’s inspirations, the concerto won the audience’s favor and a hearty ovation.

For their part, Anderson and Roe gave a scintillating performance. This is piece that it pays to hear live: the give and take between the players can be seen and enjoyed, but not necessarily heard on a recording. With their exuberant performing style, Anderson and Roe provided a visual element that only enhanced these musical exchanges and the sudden shifts in mood.

The Mozartian slow movement, played with great tenderness and pleasure by the soloists, was a delight to hear, and the spice and energy of the finale were contagious. From beginning to end, the concerto was thoroughly satisfying.

Roe returned alone as soloist for Rachmaninoff’s much loved Rhapsody. She played with great aplomb, from the strongest chords to the most delicate moments. The expressiveness of her playing and the intensity of her commitment to the music were deeply moving.

There was some lovely playing from individual musicians, moments of real beauty, but on the whole the orchestra was not at its best here. The piano forced the players farther back than usual, and the winds, sounding from the deep confines of the narrow Macky stage, were not always clear or well balanced.

Before intermission, Anderson and Roe appeared together again for two encores, giving them the opportunity to show why they are known as such charismatic players. In arrangements of Astor Piazzolla’s “Libertango” and Bernstein’s “Mambo” from West Side Story, they gave teasing, saucy performances that delighted the audience. It was sheer entertainment that did not sacrifice one iota of musicality.

After intermission, Tchaikovsky’s Second Symphony started with a dramatic chord and impressive horn solo. A faster tempo was momentarily ragged, but as the performance picked up energy from movement to movement, it became more compelling. The finale, a perfect example of Tchaikovsky’s ability to build momentum and excitement, became a showcase for the brass and timpani. Butterman’s careful dynamic control gave great impact to the ending.

This is an important season for the Boulder Philharmonic, and not just because of Butterman’s anniversary. In March the orchestra has been invited to the Kennedy Center in Washington, D.C., one of four orchestras nationwide to be selected for the inaugural SHIFT Festival of American Orchestras. By then, the orchestra will have had plenty of time to coalesce and work out the little kinks from last night’s performance.

In the meantime, the remainder of the season here in Boulder is based on an intriguing notion: collaboration between musical pairs. Anderson and Roe were the first examples of that theme. Later concerts will feature Mozart’s Sinfonia Concertante for violin and viola, played by Edward Dusinberre and Geraldine Walther of the Takacs Quartet (Nov. 6); Ethel Smyth’s Concerto for violin and horn, played by guests Jennifer Frautschi and Eric Ruske (Jan. 14); and the world premier of Stephen Goss’s Double Concerto for violin, guitar, strings and percussion, played by CU faculty Charles Wetherbee, who is also the Phil’s concertmaster, and Nicoló Spera (April 22).

Like last night’s concert, the programs for these and other concerts on the season range from the familiar to the exotic. You can see the full season listing on the Boulder Phil Web page. There is much to look forward to.