Unlike high-end hotels, Bahman Saless and the Boulder Chamber Orchestra (BCO) do not shy away from the bad luck associated with the number 13.

In fact they are embracing the risk, calling their upcoming 13th season “Jinx” and boldly ending the season with a performance of Beethoven’s Ninth Symphony, a work that has its own implied curse. In a concert titled “Ode to Joy,” the BCO will join forces with the Boulder Chorale to perform the Ninth May 5 in Macky Auditorium, with additional performances in Lakewood May 6 and Lone Tree May 7.

The rest of the season, subtitled “The Curse of the Ninth,” includes violinist Karen Bentley Pollick playing the American premiere of a new concerto by David Jaffee (Nov. 11 and 12); a guest appearance by CU opera music director Nicholas Carthy, conducting and playing Mendelssohn and Mozart (Dec. 10 and 11); BCO’s annual New Year’s eve concert; the return of violinist Lindsay Deutsch (Feb. 10 and 11); another returning soloist, percussionist Rony Barrak (April 7, 8 and 9); and several smaller concerts through the season (details at boulderchamberorchestra.com). 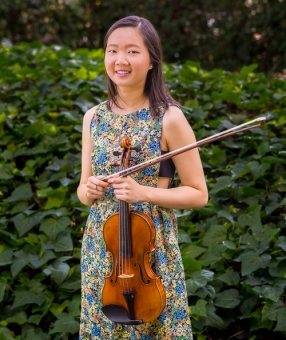 Violinist Yabing Tan will be the BCO soloist Sept. 23–24

The so-called “Curse of the Ninth” has been a danger mostly for composers. The real risk for the BCO may be the fact that Beethoven’s Ninth demands a certain weight from the orchestra, and Macky Auditorium is a big space for a small orchestra.

Stretching the chamber orchestra repertoire is nothing new for Saless and the BCO: recent seasons have included large Romantic concertos by Brahms and Tchaikovsky. And this weekend’s opening concert of the 2016–17 season (Friday in Broomfield, Saturday in Boulder) includes Brahms’ Symphony No. 1, a staple for full-sized symphonies.

In addition to Brahms, the program features violinist Yabing Tan playing two virtuoso pieces from the Romantic era, the Introduction and Rondo Capriccioso by Saint-Saëns and Henryk Wieniawski’s Second Concerto.