Other works on the summer season will be Puccini’s Tosca and two shorter works—The Impresario by Mozart and Later the Same Evening by John Musto—which will be performed both in Central City and on the road in Boulder and Colorado Springs, respectively. Those shorter works take the place in the company’s schedule of a third production in Central City, and they represent an effort to reach out and build new audiences for opera.

I recently had the opportunity to speak with Pelham (Pat) Pearce, general/artistic director of Central City Opera, about the motivations for taking those shorter works on the road, and on the condition of opera in American today. Here is part of that conversation, lightly edited for clarity:

Alexander: Over the past few seasons, you have been looking for the right menu for Central City Opera—is that fair to say?

Pearce: I think so. These days, everybody is having to adjust and in many cases, shift and change for the environment we’re living in. But ultimately everything we’ve done over these past oh-so-many-years has been about finding and developing new audiences for this art form. That’s really what it’s been about.

Some of it involved taking a show that we were doing up here (in Central City) down to Denver. Other things involved us actually creating down in Denver in the music theater vein. And what we’ve done in the last year, and what we’re doing this is year, is taking one of our slots and devoting it to an effort to find and drive new audiences for this art form.

We’ve come up with a list of things that we felt were barriers for people, and we think we’re right about this. One of them is price, and opera tickets everywhere can run to be fairly expensive, mostly because it’s the most expensive art form in the world—and even with those expensive tickets that’s still only a small percentage of what it actually costs to do it. But for something that you either don’t know or don’t think you’re going to like in the first place, you’re hesitant to spend a lot of money to try something out. So price was a deal.

Length was a deal—perceptions about how long opera is, how long the sit is, so we created things that were around an hour in length.

The fact that it’s in a foreign language is another perception, and so we tried to basically focus on things that were written in English. This year we have one piece, the Mozart Impresario, that we will be doing in translation, from its original German to English. 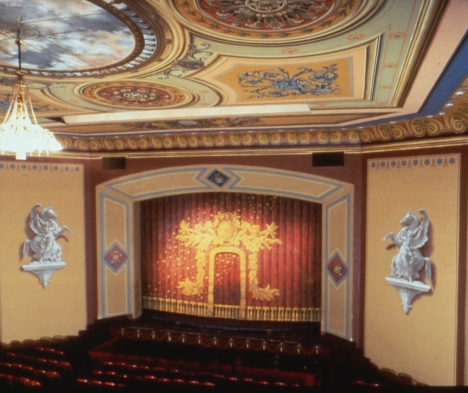 And the other thing is making people come to you. Doing opera in spaces that were created for doing that is the easiest way to do it. We have everything we need—dressing rooms, lighting, pit—all of those things we need to produce the art form. But we find that crossing that threshold is problematic for some people. So, we have said that we will do these pieces in non-traditional places, so that any pre-conception about what you have to be, who you have to be, what you have dress like—all of those things are shifted to the side and we’ll do these pieces in nontraditional places.

So those four things are sort of the drivers for us, in addressing how we take this third of our offerings in the summer and translate it into something we think will address all of those barriers. So this year that happens to be Mozart’s Impresario and John Musto’s Later the Same Evening. That was a long answer to your question, but I think that’s absolutely the correct answer in the end.

This fascinates me, because there are areas of opera that are thriving right now. For example, I’ve been to some very successful premieres in the past year: Manchurian Candidate by Kevin Puts at the Minnesota opera; Cold Mountain by Jennifer Higdon at Santa Fe; and The Shining by Paul Moravec, again at the Minnesota Opera. And we had Scarlet Letter by Lori Laitman at Opera Colorado this spring.

People do seem to respond to new work, at least the first time. There’s always a cachet with a world premiere, especially these days. It becomes an event, a “thing” that everybody feels like they need to be there, which is great, especially for the original commissioner and presenter. The subsequent productions of it, in other places, (are another matter).

In the 1980s and ‘90s Opera America and the National Endowment for the Arts gave out money for people to commission new work. And what they found was that people were willing to commission new work, but the work was not really going anywhere because there weren’t subsequent productions. It didn’t have the opportunity to grow and to evolve, and for more people to see it. And so in the next couple of decades they gave money to encourage people to take the risk of that second production of the work.

In many cases these days, people have co-commissioned new works and they’ve set up, like they did with Moby Dick (by Jake Heggie), and like they did with Cold Mountain, multiple presenters. That cuts down on the risk and the cost of the original commission. As part of doing that, they have first dibs (on subsequent productions in other places). And so Cold Mountain went from Santa Fe last summer to Philadelphia over the course of this past season. The largest one in recent memory was Moby Dick, which started off in Dallas and it took it almost two and a half years to get through all of the co-commissioners.

Today, some pieces do go on to have real success around the country. Jake Heggie’s Dead Man Walking, which you produced in 2014, is a good example.

Dead Man Walking is a really wonderful piece. It works, and nine times out of ten, new work is not going to work. I mean, that’s the reason most people don’t present new productions of works after the premiere—because having everything come together and have a piece actually work is hard, and it’s rare. Even back in the heyday of opera, there were lots of operas written, but the ones that we still see today are the ones that rose to the top.

There are many operas we’ve never heard of, for good reason.

There are a lot of different ways to develop a new audience. And in addition to people that are commissioning these new works, in big houses, and doing them in their home theaters, there are also a plethora of new, very small opera companies that are popping up in larger cities, usually, that do work in non-traditional places—in warehouses, that sort of thing. Nobody gets paid much and they don’t charge much for the tickets, but people show up to see it. And so far they’ve managed to do it.

So everybody’s trying a lot of different things, and we’re all trying to learn as quickly as we can, from other people’s risk-taking, about what seems to work, and we try to adapt our offerings to that. Or at least a portion of our offering, so that at the same time we’re producing standard repertoire and interesting repertoire for our current audiences, we’re also working to develop new audiences. We set out a goal last year of having at least 50% of the people that bought tickets to the shows be new audience. We actually did 55%, so we did really well with that last year.

My concern was that our current audiences would want to see everything that we were doing, and would fill up all of the seats—which is a wonderful thing, but ultimately wasn’t the reason specifically we were doing it. Which is why we’ve taken at least a few of these performances off the hill, away from here. Last year we went up to Ft. Collins and down to Colorado Springs. This year, we’re going to go down to Colorado Springs and to Denver with Later the Same Evening, and to Boulder with two performances of The Impresario. So we’re taking it off the hill on purpose, and that’s often where we get the new audience.