Mozart’s Requiem: “A Musical Miracle and a Mystery Story”

It is one of the most famous stories in music history.

It was December, 1791. Mozart lay on his deathbed, with his family and friends gathered around. They sang for the dying composer, music from the Requiem that he might as well have been writing for himself and that he was never to complete. After his death, Mozart’s friends and students gathered up all the bits and pieces of music that lay scattered around the room and worked feverishly to finish the manuscript, so that Mozart’s widow could deliver a completed score to the eccentric count who had paid for it.

Out of all of the confusion there emerged a work that has captivated listeners ever since, in spite of the uncertain authorship of its various parts. “It’s a musical miracle and a mystery story wrapped into one,” says Cynthia Katsarelis, who will conduct performances of the Requiem Friday in Denver and Saturday in Boulder (7:30 p.m. April 8 at First Baptist Church in Denver, and April 9 at First United Methodist Church in Boulder). 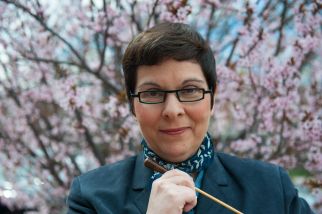 Katsarelis, director of the Pro Musica Colorado Chamber Orchestra, has put together what she considers just about an ideal group of performers for the Requiem. “Pro Musica and (Denver’s) St. Martin’s Chamber Choir are practically a dream team for the Mozart Requiem,” she says. “And our soloists are all people who are just wonderful artists.

“It’s going to be different from a Mozart Requiem with a large orchestra and choir. Our size is more like the size that Mozart would have had, and there’s a kind of immediacy and a visceral quality to doing it with a chamber orchestra and a chamber choir. I think it’s a special team, and there’s incredible potential of being a worthy Requiem.”

Like all conductors who approach the Requiem, Katsarelis had to decide exactly what to perform. Mozart left different movements in differing degrees of incompletion: some merely had to be filled in according to a partial score, some had to be completed, and some had to be composed more or less from scratch.

Adding to the confusion, Mozart left behind what his widow called “scraps of paper” that may have held music, or instructions, or both. At least two different pupils undertook a completion. And all of their contributions were mixed together, and it was years before scholars were able to separate, more or less, who did what.

Today there are numerous performing versions to choose from. The score that was turned over to the count three months after Mozart’s death was essentially completed by Mozart’s pupil Franz Xaver Süssmayr. But Süssmayr was not a very good composer: Mozart didn’t think much of him, calling him “a duck in a thunderstorm,” and he made numerous mistakes in the score that he hurriedly finished.

And so there have been many subsequent versions that aim to correct and improve on Süssmayr. Some editors have gone so far as to write whole new movements to stand alongside Mozart. Katsarelis has chosen a version created by Franz Beyer in 1971 that sticks largely to Süssmayr’s version, but polishes some of his work.

There are three movements that Mozart never started, but Katsarelis thinks that Süssmayr had some help with those. “He claimed to have composed the Sanctus, the Benedictus and the Agnus Dei, but I’m not convinced of that, for reasons right out of the music,” she says. “I had my doubts to begin with. Süssmayr never, ever composed anything of the caliber of (those movements).”

She has a “sneaking suspicion,” she says, that the scraps of paper that Mozart left had music on them that Süssmayr was able to use. And, she adds conspiratorially, “I have a theory that I actually don’t have an ounce of historical evidence for, but during the time that Süssmayr was completing the Requiem, he was studying with Salieri.”

That Salieri? The one who definitely didn’t poison Mozart but was still the villain of the play and movie Amadeus?

Yes, that one. “I just have this sneaking suspicion that Salieri might have helped,” she says. And it’s definitely not the craziest theory about the Requiem, which has attracted conspiracy stories from the date its very first performance.

Regardless of who wrote those movements, and whose help they might have had, “the meat of the Requiem is what Mozart wrote,” Katsarelis affirms. And after the disputed movements, the Requiem ends with two more movements that re-use Mozart’s music from the beginning.

Following the Requiem, the concert will include one more short piece, Mozart’s beautiful and elegiac Ave verum corpus, composed only months before the Requiem. “By doing the Ave verum corpus, we’re absolutely sure that we’ll be ending with Mozart, no question,” Katsarelis explains. “It’s a piece that everybody knows and loves, and it’s a very comforting and beautiful piece.”

In spite of the mystery and confusion, the different hands that touched the Requiem, and all of the controversy that has swirled around the piece over the centuries, “the fact the sublime music comes through is pretty miraculous,” Katsarelis says. “It is deeply moving to do the piece that was the last thing Mozart composed.

“He made it the most beautiful music that he could possibly write. That’s his final gift to us, and it’s one that I receive very gratefully, and that we’ll share on Friday and Saturday.”