Composers who write their own musical eulogies do not usually create jolly pieces. 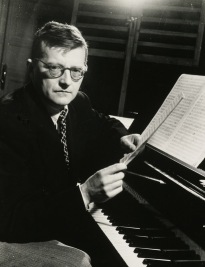 Dmitri Shostakovich, who suffered various forms of personal and artistic oppression throughout his career, was certainly no exception. When he wrote his Eighth String Quartet in 1960 he was contemplating suicide—which his friends prevented, fortunately. The work he wrote, dedicated to “the victims of fascism and war” but also reflecting his own suffering under the Soviet regime, remains a powerful testament to a low point in his life.

“This is really dark” says Cynthia Katsarelis, who will conduct the string orchestra version of the quartet, the Chamber Symphony for String Orchestra, with the Colorado Pro Musica Chamber Orchestra Friday in Denver and Saturday in Boulder. “He thought it was his own eulogy.”

The concerts are part of a two-year celebration of Shostakovich chamber music organized by the Colorado Chamber Players. Other works on the program will be the world premiere of Life Between Lives by American guitarist/composer D.J. Sparr, J.S. Bach’s Third Brandenburg Concerto, and the Study for Strings by Pavel Haas.