Pro Musica Colorado Chamber Orchestra, the last of the local orchestras to launch the 2015–16 season, got underway in Boulder last night (Nov. 21) with a bustling, energetic program featuring the world premiere of Kurt Mehlenbacher’s Flying Crooked and two major pieces by Mozart.

Cynthia Katsarelis directed the performance in the First United Methodist Church with her usual focus on the overall architecture and momentum of the pieces, and retired CU prof. Larry Graham gave a fluid, nuanced reading Mozart’s C-minor Concerto, K491. The same program had been played Friday night in Denver.

In remarks before the concert began, Mehlenbacher explained that the title Flying Crooked was only applied after the piece was completed. Based on a suggestion from his roommate, it carries no implication that the music should be seen as deliberately descriptive or programmatic.

Be that as it may, the propulsive rhythms that dominate the texture do suggest flying, or other kinds of movement—by turns rushing, loping, flitting and soaring. The thoroughly enjoyable score contains many short episodes that are sometimes contrasting, but the impulsive motor rhythms are rarely absent from the background. Based on this performance, I would urge other smaller orchestras to take up Flying Crooked as an energetic and effective way to open any program.

For better or worse, Mozart’s C-minor Concerto sounded just like what it was: a performance on modern instruments and piano in a highly reverberant space. The First United Methodist sanctuary is a long, rectangular shoebox, perfectly suitable for services but less than ideal for orchestras.

Bass notes in particular tend to spread and muddy the texture, so that every timpani stroke, for example, threatens to cover details in the music. This is not a question of orchestral numbers—with only one string bass and three cellos, the ensemble is well balanced. The timpanist used the appropriate hard mallets for an incisive sound. But there is little players can do when notes continue to resonate too long after they are sounded. Unfortunately, Boulder does not have an ideal small auditorium, so Pro Musica and other groups will continue to rely on churches for the foreseeable future.

(I did not hear the Friday performance in Denver’s First Baptist Church, but I heard reports that the sound was much less problematic there.) 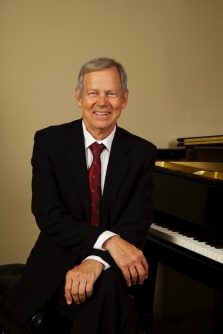 The lack of clarity aside, Graham played with great facility. He had full command of dynamics and control of the individual voices in the texture, providing as much clarity as possible in the space. His playing was especially lovely in the slow movement, where the softer and thinner orchestral texture allowed him to be distinctly heard throughout. His sparkling performance of the sprightly finale was enhanced by lovely playing from the Pro Musica winds.

Graham has long been a popular fixture on the Boulder classical music scene. It has been reported that this might be his last performance with orchestra, although he seems to be less than emphatic on that subject. His playing is more than effective, and he continues to enjoy intimate concerts, so there should be no hint that he is loosing any ground as a performer. Perhaps the right concerto will be found to entice him back onto the concert stage.

The other Mozart on the program was the Symphony in D major, K504, known as the “Prague” Symphony because of where it was written. It begins with a brooding slow introduction that contains more than a hint of the D minor of Don Giovanni, the opera Mozart was soon to write for the theater in Prague. Katsarelis and Pro Musica brought out all the pathos of the opening gestures before launching on a rhythmically energized performance of the main movement.

The contrast between the dramatic, driven first allegro theme and the tenderness of the second theme was carefully managed and highly effective. Here, the drama inherent in the formal structure of the 18th-century symphony came vividly to life. In the contrapuntal development section, the entrances were well marked, leading to a satisfying climax before settling back down into a gentle transition back to the first theme for the recapitulation.

The slow movement flowed comfortably and smoothly, and as it should the symphony ended with an exuberant romp. Katsarelis’s wise decision to honor the repeats in the finale provided a touch of humor when the piece came scurrying to a definite end, only to launch suddenly and busily back into a developmental passage. The ending was consequently all the more effective the second time.