Composer Charles Denler has always felt close to nature, so it makes sense that the world concert premiere of his Portraits in Season for piano and orchestra would be supplemented by the work of two other nature-loving artists: the American essayist Henry David Thoreau and Colorado photographer John Fielder.

Saturday’s performance by the Boulder Philharmonic and conductor Michael Butterman will feature Denler as piano soloist (7:30 p.m. Nov. 14 in Macky Auditorium; tickets). During the performance, Fielder’s photographs will be projected on a screen above the orchestra, where quotes from Thoreau will appear before each of the score’s movements.

Denler’s Portraits will be bookended by two pieces by Brahms, a composer who also enjoyed the natural world on his solitary walks in the Vienna woods. The concert will open with the Schicksalslied (Song of Destiny), performed with the Boulder Chorale in celebration of their 50th anniversary, and end with the Symphony No. 2 in D major. 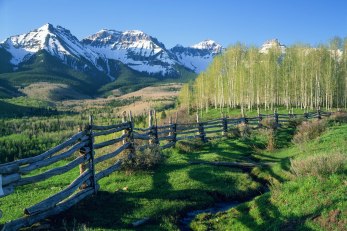 Butterman says that the idea of having images accompany Denler’s music occurred to him the very first time he heard it. Denler had compiled digital recordings of the music—now released on an album—as he was working on it.

“I thought it was very fun music,” Butterman says. “But as I was listening to it, I wanted to see something. I wrote back and said this fits with our focus on local composers, and also nature and music together, but what about adding some visuals? He said ‘fantastic!’”

Adding images to Denler’s music was more than logical, since he is best known as a film composer. And Fielder, known for his nature photography throughout Colorado, seemed an ideal choice, too. For one thing, his photos have often been featured with music: this will be the fourth performance by a Colorado orchestra this year to use his photos.

Boulder audiences will remember that Fielder’s work was featured by the Colorado Music Festival last summer in performances of music by Sibelius and Beethoven. His photos were also featured in performances in Breckenridge and Steamboat Springs. 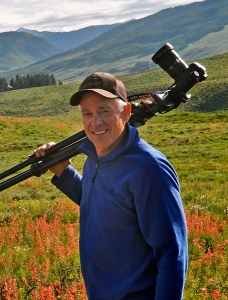 “I’ve been putting music to my slides for years,” Fielder says. “I love the experience—the whole is greater than the sum of the parts when you put music and imagery together.”

Fielder, who is recognized for his books and calendars of Colorado scenes, is deeply devoted to the outdoors. “I regard nature as not just views,” he says. “I enjoy being outdoors in the wilderness. The sound, the smell, the taste and the touch, as well as the views, are what make nature sublime for me.”

Portraits in Season has movements that pass through two complete years, and then suggest the start of another of life’s continuing cycles. And Denler intends this very much as a metaphor.

“The underlying meaning is walking through life,” he says. “I want people to think about that— to listen to this music and see that growing older is a gift. We should celebrate every single day and embrace the idea of aging.”

Denler’s music is often inspired by visual images, whether films that he is writing for, or personal experiences for his concert music. “This particular suite is based on visuals that I have from hiking the ponds and lakes (of) South Platte Park, walking along the Highline Canal, and even in my backyard,” he says.

“I’m a native New Englander, and I always gravitated toward (Thoreau’s) work,” Denler explains. “He wrote about nature from the context of living inside of it, and I wanted that reflected in the music. Sometimes, the quote just made sense for that season, (so) it may not reflect particular areas here in Colorado.”

Butterman chose Brahms for Denler’s companion on the program, because he sees a connection between Denler, nature, and the Viennese composer. “Brahms never wrote anything that he called ‘Babbling Brook’ or something,” he says. “But yet, when I think about composers who drew nourishment from nature, he’s actually the first composer that comes to my mind.

“The energy and the centeredness that he drew from long walks in the Vienna Woods strikes me as a little bit like Thoreau—somebody who needed to be away from people and by himself in nature. They (both) found their batteries recharged by the experience.”

Of the two works by Brahms, the Second Symphony will be the most familiar. “It’s full of all of the hallmarks of Brahms’s music that I really love,” Butterman says. “The rhythmic ambiguity, his ability to mix the serenade-like quality of his woodwind writing with much more accented and aggressive writing in the strings. But there’s an overlaying of sort of a placid character to it.”

The Schicksalslied, on the other hand, has placid moments, but they are definitely not part of Brahms’s depiction of human destiny, which is one of turbulence and forces beyond human control. “I love the beauty of the outer segments,” Butterman says, “and then the turbulence of what the chorus sings in the middle is a dramatic contrast.”

The beginning seems to be a description of Elysium, but that peaceful realm is contrasted with our life on earth. In the central choral section, “we are buffeted by fate, thrown hither and yon by forces that we have no ability to influence or control,” Butterman says. “It basically says that things are really nice up above, wherever that may be, but down here it’s every man for himself.”

The text ends there, but Brahms has added a closing orchestral section that provides a ray of hope for a better existence at the end. Which brings us back to Denler’s contemplative and comforting Classical/New Age score, which seems to evoke the peace that Brahms only hinted.

Or in the words from Thoreau’s Walden that Denler has chosen for one of the movements, when “the day and night are such that you greet them with joy, and life emits a fragrance like flowers and sweet-scented herbs . . . all nature is your congratulation and you have cause momentarily to bless yourself.”

World concert premiere of Portraits in Season for piano and orchestra, by Charles Denler
Johannes Brahms: Schicksalslied and Symphony No. 2 in D major

Charles Denler’s CDs and John Fielder’s books will be on sale in the lobby before and after the performance.