Central City Opera (CCO) is going on the road with two small-scale, one-act operas that could not be more different.

The comic romp Don Quixote and the Duchess by Baroque composer Joseph Boidin de Boismortier, and the sober religious parable The Prodigal Son by Benjamin Britten supplement two 2015 summer season mainstage productions. Both shows opened in alternative venues in Central City this week, where they will be repeated later this summer.

Don Quixote and the Duchess

It started with a vacuum sweeper. 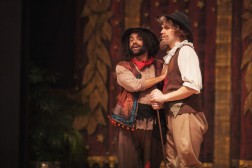 The servants of the titular Duchess were sweeping up the “castle” as the last of the audience took their seats in Central City’s Atwill Gilman Studio at the Lanny and Sharon Martin Foundry Rehearsal Center, just up the hill from the historic Opera House. The flat floor and hard-backed chairs do not make this an ideal performance space by any means, but any discomfort was quickly forgotten by most as the audience got into the slapstick spirit of director Kyle Lang’s production—starting with that vacuum sweeper and lasting straight though to the end.

Like most French operas from the Baroque era and well into the 19th century, dance was a large component of the score. The music, if not exactly memorable, is at best delightful, rhythmically engaging and expressive. Conductor Christopher Zemliauskas led a well defined, spirited performance by the chamber orchestra and cast.

Since no virtuosic Baroque ballet moves were called for, the young cast of CCO apprentice artists were equal to the director’s modest dance demands, tending more to fun than artistry. They danced, and sang, and mugged when appropriate, with great pleasure and energy, giving the audience a lot to enjoy. This is not a deep or thoughtful work, but it is fun for everyone: the children I saw in the audience were captivated by the colorful costumes and the antics of the cast.

Don Quixote and the Duchess: The ensemble, members of the Bonfils-Stanton Foundation Artists Training Program. Photo by Amanda Tipton.

If there is a problem, it is in understanding of the text. Good diction and projection is a must, but in that space I only made out about 50% of the words. In general the men, with fewer decorations in their musical lines, fared better than the women at conveying the text.

Everyone sang strongly, but one performer stood out: soprano Maya Kherani as Altisidore, the Duchess, who also appears as “The Queen of Japan” (Baroque opera favored foreign characters and locations, but was not strong on geographical accuracy). Her bright, strong voice and fluid dancing were notable strengths of the production. James Dornier as Don Quixote, Michael Kuhn as Sancho, and Joshua Arky as Merlin, aka the Duke, all made strong impressions.

Finally, it is worth noting how many of the archetypes of 18th-century opera are incorporated into, and made fun of in this short and satirical work. There is a hero on a quest (Don Quixote) with a comic sidekick (Sancho); there is a wizard (Merlin) with a cruel servant (Montesinos); there is a magic garden and magical transformations. Never mind that here these are all delusions or deceptions; they were ripe for satire because they figured so prominently in Baroque operas well known to Boismortier’s audience. Most of those works are little known today, but the same elements can be found in operas throughout the 18th century, including Mozart’s Magic Flute, still one of the most popular works in the repertoire.

Don Quixote and the Duchess will be repeated in Central City at 12:30 p.m. Aug. 1, and performed at noon Aug. 6, in First United Methodist Church in Fort Collins. Tickets are available here.

As far removed as possible from Boismortier’s frothy comedy, Britten’s Prodigal Son opens not with highjinks or noise, but with a procession of monks singing unaccompanied chant. This announces immediately that the subject is serious, and the meaning deeply spiritual. And in spite of the somber subject, I was happy to see that the show was sold out, with a line waiting entrance before the curtain. Three cheers for Benjamin Britten and CCO’s adventurous audience!

The Prodigal Son is one of the three “church parables” that Britten composed in the 1960s that reflected the composer’s interest in both medieval liturgical dramas and Japanese Noh plays. These unfamiliar models and the conceit of having the work performed as a play-within-the-play by an all-male cast of monks combine to distance the work emotionally. In this case, the production by director Ken Cazan creatively sought to bridge the gap by bringing the actors into the audience/congregation throughout the performance. People in my row mimed giving alms to the begging choir members who were extending their empty caps.

Tenor Bille Bruley bravely took the role of the Tempter, a role composed, like most of Britten’s high tenor roles, for the bright, edgy voice of Peter Pears—and made it his own. His strong, clear voice rang out forcefully, especially when warning of the havoc he would create. Indeed, all four lead singers—Bruley, Matt Moeller, Nicholas Ward and Michael Kuhn—were unintimidated by roles that had been originated by some of the best known English singers of their generation.

In Central City’s lovely St. James Methodist Church—the oldest protestant church still in use in Colorado, built in 1859—the words were clear from all the singers, which added greatly to the impact. Britten takes credit for this as well: his sense of instrumental sound and economic use of his small ensemble—alto flute, trumpet, horn, viola, double bass, harp, organ and percussion—provide both a clean canvas for the singers and an expressive dressing for the text.

All the players executed their parts well, but special mention should be made of the virtuoso trumpet and percussion parts that drive much of the music. Because the score was originally written with free meters and was intended to be performed without conductor—a hugely daunting task in most settings—conductor Zemliauskas had a notable challenge providing more regular meters to keep everyone together. Happily, he succeeded admirably.

The Prodigal Son is to be performed at noon July 30 in the First Christian Church in Colorado Springs, and will be repeated in St. James Church in Central City at 12:30 p.m. Aug. 5. Tickets are available here.

I have already reviewed CCO’s superb La Traviata, the first of the mainstage shows to open, in the pages of Boulder Weekly. The production, with Ellie Dehn’s standout performance at Violetta, runs though Aug. 8, with tickets available here.

Filling out the season is Mitch Leigh and Joe Darion’s 1965 musical Man of La Mancha. If you only know this evergreen show through the innumerable community and high school productions, you owe it to yourself to make the drive to Central City. The CCO production of director Paul Curran and designer Court Watson recaptures both the gritty immediacy and the anti-establishment convictions of the ‘60s which were so much a part of the original show. 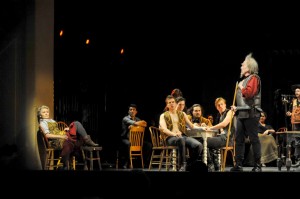 Consider: the main character, Cervantes/Don Quixote has been imprisoned by the Inquisition for his failure to conform to the established beliefs. He is accused by his fellow prisoners of being an idealist, a bad poet, and an honest man—common enough descriptions of leaders of the ‘60s counterculture. And at one point, a character says “facts are the enemy of truth,” a line that had great meaning during the civil unrest of the Vietnam war years, when “truths” announced by the establishment were often undermined by facts.

The result is a production that does not gloss over the dark sides of the story. The language does not pull many punches, and there is a painfully graphic rape scene in the second act. At the same time, the show, like the ‘60s radicals that survived into the following decades, refuses to give up its idealism and its hopes. The production leaves one with a greater respect for the creative work of Leigh and Darion, and with much to think about as well.

Man of La Mancha opened July 18; the performance I saw is thus about midway in the show’s run, which continues until Aug. 9. Robert Orth, who has been much praised as Cervantes/Don Quixote, was absent due to a family emergency, and his role was taken by an apprentice understudy, Alexander James York, who took the stage with great assurance and gave a strong performance.

The understudy who saves the performance and jumpstarts a career is one of the oldest clichés of theater, but sometimes impossible dreams come true. York was a commanding presence and sang with a lovely lyrical baritone. I expect to hear him back at Central City in future as a full-fledged artist.

The cast of La Mancha is consistently strong. Keith Jameson is a Sancho Panza who could steal any show with his endearing comic persona. In Lucy Schaufer, Central City has an Aldonza who more than holds up her part in the show. Aldonza is a crucial character—her transformation from angry kitchen slut to a loving presence at the end has to be believable and moving. Schaufer grasped the role with great energy and carried the audience with her.

The depth of the cast was on display in the number “I’m only thinking of him,” performed with appropriate sneering glee by apprentice artists Andy Berry, Michael Kuhn and April Martin (all of whom have roles in the one-acts as well). It is a strength of the production that the words are clear throughout.

Comic impact was also provided by Adelmo Guidarelli as the Innkeeper/Governor, Alex Scheuermann as the barber, and many others in the smaller roles that complete the tapestry. The multi-talented Maya Kherani appeared as the Moorish dancer. Mention must also be made of conductor Adam Turner and the excellent CCO orchestra. Hearing a Broadway musical with a full orchestra of the highest quality in the pit is a delight, and it reveals a depth in the music that is not otherwise apparent.

Tickets for the remaining performances of Man of La Mancha are available here.