Season runs from Baroque to Brahms to Britten, plus the Boulder premiere of a piano (yes: a piano, not a player)

Bahman Saless and the Boulder Chamber Orchestra will expand beyond the usual Classical/Baroque repertoire of smaller ensembles for their 2015–16 season, with concertos by Romantic composers Brahms and Tchaikovsky.

The season will also include contemporary works by John Rutter and Astor Piazzolla, music from Alfred Hitchcock’s iconic film Psycho, and the Boulder debut of a historical piano that was built in Paris in 1895.

Series tickets for the 2015–16 season are now available from the BCO. The full season schedule is not yet listed on the orchestra’s Web page, but the BCO shared a preliminary program with Sharpsandflatirons, as listed below. While some programs are incomplete, the dates and venues are definite. Watch the BCO Web page for more details.

There will also be a series of mini-chamber concerts, to be announced later.

The season will open Oct. 30 in Boulder and Oct. 31 in Lakewood with a concert featuring pianist Mina Gajić performing on an 1895 straight-strung Érard piano. A performer who has played on many Romantic-era pianos, Gajić found the Érard in Amsterdam and had it shipped to her home in Boulder in 2014. The one-of-a-kind instrument was commissioned by a noble family in Brussels, and was hand painted for them.

The historic instrument is ideal for one work on the program—Franz Liszt’s one-movement Malédiction for piano and strings, which was composed in the 1830s. Gajić will also play a 20th-century work on the same piano, Benjamin Britten’s Young Apollo for piano and strings. The program, calling on the BCO strings only, will also feature film music from Psycho and Mozart’s Adagio and Fugue in C minor for strings. 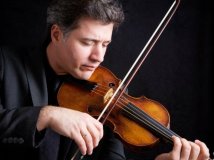 The following concerts, Dec. 4 in Boulder and Dec. 5 in Broomfield, will present the pairing of Vivaldi’s evergreen Four Seasons concertos for violin and strings, and the Vivaldi-inspired Four Seasons of Buenos Aires by Argentinean tango composer Astor Piazzolla. The soloist will be Zachary Carrettin, known in Boulder as the adventurous director of the Boulder Bach Festival. Though far from Bach, Piazzolla is not out of Carrettin’s rather large musical ball park by any means: he performed for 10 years in a duo with a “Tango Nuevo” composer working in the same style as Piazzolla.

It is noteworthy that this will be the second opportunity in less than two years for Boulder audiences to hear the Vivaldi/Piazzolla pairing, which was presented by the Pro Musica Colorado Chamber Orchestra in April of 2014, with violinist Lina Bahn and conductor Cynthia Katsarelis. The pairing of these two works was popularized by violinist Gidon Kremer when he recorded them together, and it has been played by violinists around the world.

The performance is also the second collaboration between the Bach Festival and a Boulder-based orchestra to be announced for the coming year, along with a semi-staged performance of the St. Matthew Passion with the Boulder Philharmonic and conductor Michael Butterman scheduled for April 23 and 24, 2016.

Concerts Dec. 19 in Boulder and Dec. 20 in Broomfield will feature soprano Jennifer Ellis Kampani performing Baroque vocal music (full program to be announced later). Especially known for performing the music of Spain and Latin America, Kampani has sung numerous roles in Baroque opera productions and appeared with leading early music ensembles in the U.S. and Europe.

On the same program BCO will play John Rutter’s Suite Antique for flute, harpsichord and strings; and Sibelius’ Rakastava (The lover), a short suite for string orchestra based on folksongs that tell of a nighttime tryst that must end at dawn.

BCO will continue its recent tradition of playing a News Year’s Eve concert at the Lakewood Cultural Center. The program will be announced later.

The final two programs of the season, in April and May, will see the orchestra entering Romantic repertoire with two much loved virtuoso concertos. Concerts April 15 in Broomfield and April 16 in Boulder will feature pianist Soheil Nasseri returning to the BCO for Brahms’s Second Piano Concerto, on a program that will include Mozart’s Symphony No. 40 in G minor.

The final concert of the season will be May 6 in Broomfield and May 8 in Boulder. Multiple prize-winning violinist Chloé Trevor will play Tchaikovsky’s Violin Concerto on a program with Beethoven’s “Pastoral” Symphony.