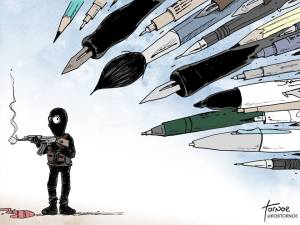 Cartoon by Rob Tornoe in response to the killings in Paris.

In that spirit, and as a journalist in my own little corner of the media world, I declare my absolute solidarity with the cartoon artists and journalists of Charlie Hebdo, of France, and of the world. Freedom of expression, which is enshrined in the very first amendment to the U.S. Constitution, is an irreplaceable cornerstone of democracy and freedom in a progressive society.

Are some of the cartoons that Charlie Hebdo has published offensive? Yes. But the magazine offended widely, not narrowly; to use an overworked phrase, they were truly an “equal opportunity offender,” far more so that most who claim that title. Do some of them cross a line that I would not want to cross? Yes. But the right of the Charlie Hebdo cartoonists to offend and to cross lines is part of the freedom that we cherish. Freedom of expression is no freedom at all if it only applies to opinions that are endorsed by social convention. Which is why I am posting this on sharpsansflatirons.

I also want to express my deepest sympathy to the family and friends of the French journalists and police who were slaughtered. I cannot imagine the anguish that is being felt. But I have been heartened by the response of the French people and the world’s press.

Here are links to a few of the responses that I have found, and that I urge readers to look at and consider. There is much duplication among the cartoons, but it is valuable to observe how widely they are being shared around the world today. That is, if nothing else, an indication of how universal the response has been to this horrible—but sadly no longer unthinkable—tragedy.

Toronto Globe and Mail: “Cartoonists Around the World Respond”