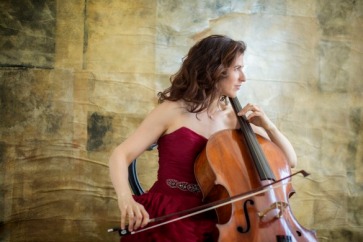 Inbal Segev brings a “tasting menu for the cello” to Boulder this weekend.

The Israeli-American cellist is the soloist with the wind players of the Boulder Chamber Orchestra (BCO) and conductor Bahman Saless for “Allure,” the third concert of BCO’s 2014–15 season (7:30 p.m. Friday in Broomfield, Saturday in Boulder).

In addition to Friedrich Gulda’s Concerto for cello and wind orchestra—Segev’s “tasting menu”—the program features a Serenade for winds by Mozart and Stravinsky’s rarely performed neo-classical gem, the Octet for wind instruments.

Segev will also have some Bach in her luggage: The First, Second and Fourth suites for solo cello, which she will play on a recital Sunday afternoon in Boulder. Billed as a “CD Prerelease Recital,” that performance is the outgrowth of an ongoing recording project that, when completed later this year, will encompass all six Bach solo cello suites.

Gulda’s Concerto, written in 1980, combines influences from the composer’s training as a classical pianist and his love for American jazz. “The concerto has five movements, they are very varied in style,” Segev says. “There’s jazz, there’s Baroque, there’s one movement I call the ‘Ricola!’ movement because of the horns. And the third movement, which is like the heart of the piece in some ways, is a huge cadenza.”

The cadenza movement is a particular challenge from the composer, who included “two spots where the star cellist must improvise,” he wrote.

“That was a big challenge to me,” Segev says. “Back in the days people used to write their own cadenzas all the time, especially violinists and pianists, but cellists—we’re not used to it! I didn’t write it note by note. I wrote a road map to remind myself what I want to do, so I change a little bit” in each performance. 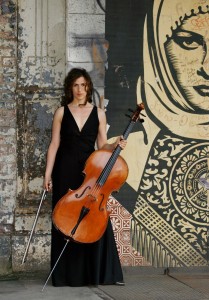 Even more difficult for the soloist is the final movement. When I spoke to Segev earlier this week, she said “I’ve been practicing (that movement) this afternoon, and it’s really fast sixteenth notes, very virtuosic, all over the place. It took me quite a long time to find out the right fingerings for it—you play it slowly and it sounds great, and then it doesn’t work fast, because all the times you leap and change!”

Fortunately Gulda himself solved what Segev thinks would have been an even greater challenge. “There’s just no way you can compete against a brass band going full throttle,” she says. “Luckily the cello is amplified, and he did really well by doing that.” She will in fact be playing the same 17th-century cello she uses for the Bach suites, but with a contact microphone mounted on the cello’s bridge.

For the remainder of the BCO program—actually the first half of the concert—Saless decided to pair two relatively short pieces, a Mozart Serenade and the Stravinsky Octet. “It’s very different to put three pieces for wind instruments (on a concert, rather) than having an entire Mahler symphony, because with a Mahler symphony all the winds at some point take rests,” he says. “To put (a long piece for winds) next to the Octet, you would kill them. There is just not that much wind in a human being!

“So one of the things we have to do is we have to play the Mozart at a little bit of a snappy tempo.”

Saless originally was not sure about programming the Stravinsky, because it is not particularly well known or popular. Then he suggested it to the players.

“The orchestra was really excited about doing Stravinsky, so I said, ‘OK, let’s just do the Stravinsky,’” he recalls. “I’m really enjoying it through my musicians because I can tell they’re having a blast doing it.”

Although Mozart and Stravinsky sound very different, Saless wants you to know that the Octet—written during Stravinsky’s “neo-classical” period in the early 20th century—is actually very classical in conception and structure. “The first movement is a sonata form, the second movement is variations, and the third movement is a rondo with fugue-like themes,” he says.

“Because the Mozart also has a variation movement, I’m going to draw this parallel between the two pieces. One is Mozart 250 years ago, and the other is the same form, but 20th century. I feel like it’s part of my obligation to explain it to the audience before we perform it, because it’s much more modern sounding than it really is.”

Looking ahead to Sunday, Segev’s recital of Bach suites and the Bach recording project are central to her identity as a cellist. “I’ve been preparing for this basically since I’m six,” she explains. “I started working on the First Suite when I was 6 years old. This my life’s work.

“We call it Bach Everest around the house, and it’s not really a joke. It’s really a certain time in a cellist’s life, it’s the pinnacle of our works and it’s a journey to do it well. (When playing the suites,) I try to be honest to who I am as a musician, and bring the best of me.”

In the meantime, Segev likes the Gulda Concerto as a break from working so intensely on Bach. “I just thought it was a really fun concerto,” she says.

“I think it’s something that audiences everywhere can dig, whether they are relating to the Beethoven and the Brahms or they like lighter fare. I just hope people are going to have fun.”

NOTE: This article has been edited 11/6 to correct punctuation.