Beethoven’s Ninth Symphony is a piece burdened with so much projected significance that it is difficult to hear it just as a piece of music.

Unquestionably a great symphony, it has also become the preferred piece for any major occasion. It has been played for memorials of all kinds, for the reopening of Germany’s Bayreuth Festival after World War II, as the European anthem, for the demolition of the Berlin Wall, to mark the millennium, for Olympic ceremonies and presidential inaugurations, for orchestras opening or closing anniversary seasons, and just this year for the meeting of the G-20 in Hamburg, Germany. 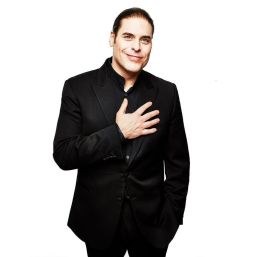 In that context, it was surprising and a bit refreshing that Jean-Marie Zeitouni programmed the Ninth not as the opening or closing gesture of the Colorado Music Festival’s 40th anniversary season, but right the middle of the summer, as if it were just another piece on the program. I believe that is a good thing: it is a better piece when taken off its pedestal and heard as a great artistic product instead of a weighty political or social statement.

I suspect that was Zeitouni’s intention. “I thought, let’s put it right in the middle,” he says. “It’s a way to connect with the people and to offer something familiar.”

However familiar it is, Zeitouni tries to approach the symphony anew each time he conducts it. “Each time I buy a brand new score, I get rid of all the markings that I have and I start fresh,” he says. “And each time I find something new, something I haven’t seen before.”

Whatever Zeitouni has found new, last night’s performance at Chautauqua Auditorium (July 13) more than justified his thinking. He and the CMF Festival Orchestra, joined by the St. Martin’s Festival Singers and an outstanding quartet of soloists delivered an immaculate performance of the Ninth Symphony, from the portentous opening haze of the first movement to the triumphant “Ode to Joy” Finale.

Among the strengths of the performance were the clarity and transparency of the orchestra throughout, a result of well controlled intonation and balance. Zeitouni’s management of the volume and pacing of the performance were remarkable. One of the most powerful moments was the return of the first movement’s primary theme. First heard as a whisper, it comes back with crashing D-minor chords that were, as they should be, the powerful culmination of all that came before. Without careful pacing and management of dynamics, that moment misfires.

The precipitous scherzo movement was marked by great economy of gesture from the conductor and absolute precision across all the tempo changes by the orchestra. The slow movement was deliciously warm, with Beethoven’s extended phrases, passages, whole paragraphs of music beautifully sustained.

The finale, some of the most familiar music in the repertoire, was marked by many wonderful expressive touches, making the music as fresh to the listener as it must be for Zeitouni with a clean new score. The chorus, prepared by Timothy J. Krueger—who got deserved recognition at the end of the performance—was exceptional, with sopranos that really can sustain those high As that Beethoven cruelly asks for, and in tune.

The four solo parts are some of the most thankless roles in the repertoire, written with no mercy, but they were made as beautiful as possible by the quartet of soprano Mary Wilson, mezzo Michelle DeYoung, tenor Jason Baldwin, and bass Timothy Collins—a last-minute replacement for CU alumnus Keith Miller. Only Collins had a moment of unease, perhaps as the new guy in the quartet, but beyond that they all sang with great assurance, even with some very brisk and exhilarating tempos.

The Symphony benefited from being played after a short opening portion of the concert, comprising two contrasting pieces: the American premiere of A Little Summer Suite by Betsy Jolas, and Mahler’s early Lieder eines Fahrenden Gesellen (Song of a wayfarer) with De Young as soloist.

Jolas’ Suite, with seven short movements in 12 minutes, reflects the atonal, atomistic style of the mid-20th century—not surprising for a composer born in 1926 and soon to turn 91. It is an assured score, but the summer she seems to be writing about struck me as a little bit sinister, with ominous clouds always on the horizon. The shifting moods were convincingly conveyed by the Festival Orchestra. 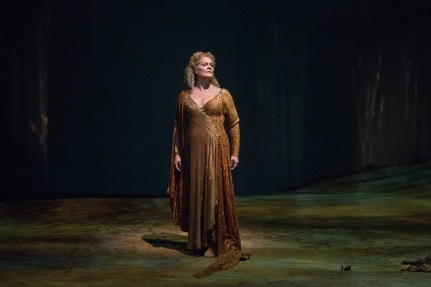 Michelle DeYoung as Venus in Wagner’s Tannhauser at the Met. Photo by Marty Sohl/Metropolitan Opera

DeYoung, a dramatic soprano with upcoming Wagnerian roles as Kundry in Parsifal, Fricka in Rheingold and Sieglinde and Die Walküre, sang Mahler’s songs with great dramatic import. If slightly overdone for early Mahler, it was nonetheless very effective, especially in the final two movements. Her expressiveness charmed the audience, while Zeitouni and the orchestra provided comfortable support.

The concert was sheer pleasure from beginning to end. I especially commend Zeitouni for allowing us to hear the Ninth as a great piece of music, fresh and powerful, but unburdened of any unnecessary weight.

The Ninth Symphony will be repeated at 6:30 p.m. tonight (July 14) on the CMF “Fresh Friday” series. Tickets from the Chautauqua Box Office.